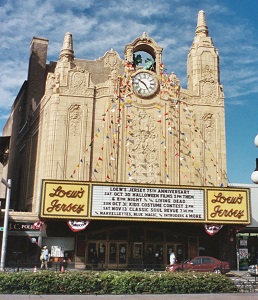 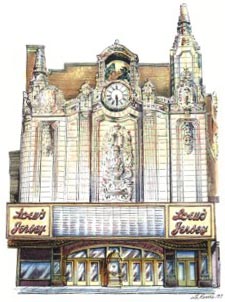 One of the five "Loew's wonder theaters," the Loew's Jersey Theater was designed by George and C.W. Rapp for theater chain owner Marcus Loew, one of the founders of MGM Studios. An entertainment entrepreneur, Loew claimed, "I don't sell tickets to movies . . . I sell tickets to theaters" (quoted in Deering). He was also the founder of MGM Studios. The lavishly decorated Jersey City theater cost over $2 million and opened on September 28, 1929, a month before the stock market crash. The Loew's Corporation installed a Robert Morton Wonder Organ in the Jersey City theater and four other theaters in Brooklyn, Bronx, Queens, and Manhattan.

Loew's theater is constructed in Baroque style, with a terra cotta façade and "French curve" marquee, and overlooks Journal Square. On top of the building is a clock tower with a Seth Thomas clockwork mechanism. It has a mechanical life-size statue of St. George on horseback that slays the dragon at fifteen-minute intervals, marked by the tolling of bells. In the evening, a red bulb in the dragon's mouth adds to the drama of the event. The figures are copper and bronze set within a terra cotta cupola that frames the statues. As part of the theater's renovation, the clock was removed in 1999 and repaired by David Morgan at the Antique Clock Gallery in Lebanon, NJ; it was reinstalled in 2001. The clock tower has also been restored.

The theater's three-story oval lobby is heightened by a rotunda sustained by faux marble columns and gilded arches. A 14.5-foot Czechoslovakian crystal chandelier, an antique French Buhl clock in the foyer, gold leaf mirrors, and red carpeting were part of the décor that created an otherworld atmosphere after one entered the bronze doors. Two curving staircases lead to the second-floor landing and balcony adorned with art and statuary.

The Spanish Baroque-style auditorium had over 3,000 red-velvet seats. From its domed ceiling hung a ten-tier chandelier. The proscenium stage is a generous 72 feet long and 33 feet wide. The acoustical construction of the plaster walls was the first of its kind to complement the "talkie" films. Here theatergoers saw stage shows as well as first-run movies. On opening day, there was a stage show with various acts, a performance by Ted Meyn on the Wonder Morgan Organ, and the showing of the film Madam X, starring Ruth Chatterton. Vaudeville performers such as Bing Crosby, George Burns and Gracie Allen, Duke Ellington, Cab Calloway, Mickey Rooney, the Ritz Brothers, the Four Seasons, and Milton Berle, among others, appeared on stage in the 1930s and the 1940s; the Four Seasons, a Newark, NJ-based singing group, performed in concert in 1968.

In 1974, Loew's was divided into three viewing rooms in an attempt to compete with the suburban multiplex cinemas. The theater subdivision was not successful and caused the loss of much of its early décor. The theater closed on August 21, 1986. The final movies screened were One Crazy Summer and Friday the 13th Part VI: Jason Lives.

Hartz Mountain Industries bought the property to build an office tower for $1.5 million. In 1993, the City of Jersey City bought the building for $325,000 to restore it as nonprofit art and entertainment center in reaction to community opposition to the potential demolition of the theater.

Theater supporters formed the Friends of the Loew's. Led by Colin Egan and Pattie Giordan, its volunteers, numbering approximately 200, with the Jersey City Economic Redevelopment Corporation set to work to bring the theater back to its former glory. The theater has received $2.5 million in grants from organizations like the New Jersey Historic Trust. Work began on the interior, starting with tearing down the dividing walls, restoring the seating, and painting and cleaning the landmark theater.