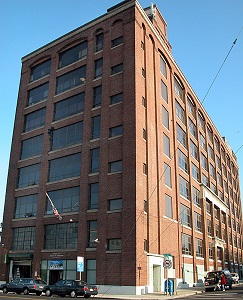 Jersey Board of Education Administrative Offices
(former Lightolier Building)
Halstead Place near Claremont and West Side Avenues
Phot: A. Selvaggio 2002 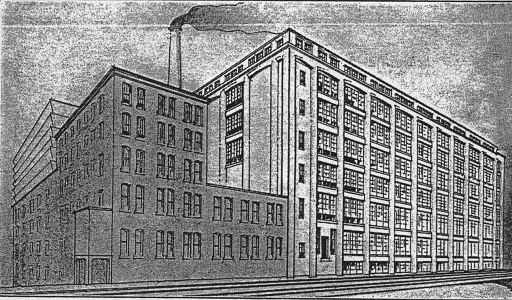 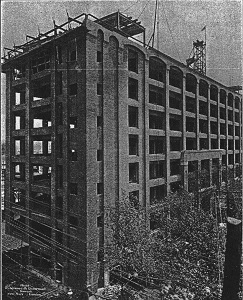 346 Claremont Avenue, near the West Side Avenue Station of the
Bergen-Hudson Light Rail

The Jersey City Board of Education building on Claremont Avenue was built in 1921 for the Continental Candy Corporation. The New York Times reports that the eight-story building was designed to be "the largest, most modern candy plant in the world" (10 February 1921). It was designed by the architects Havens & Crosby, constructed by James Mitchell, Inc. and cost approximately $2.5 million. Financial problems seemed to plague the parent company of Continental Candy making its Jersey City operation in the building short-lived. Western Electric/AT&T briefly became the new occupant in the mid-1920s.

In 1927 the building became the manufacturing plant for the production of lighting fixtures for the Lightolier Company. Bernhard Blitzer founded the company in the Bowery section of New York City as the New York Gas Appliance Company in 1904. An Austrian immigrant, Blitzer learned about the retail trade industry by selling red suspenders from a pushcart. A keen observer of the lighting innovations, he forecast the potential of the electric light bulb to bypass the use of gas fixtures. Hedging his bets, he found his company selling both gas and electrical fixtures until 1914 when he settled on the future of electricity.

The company changed its name to Lightolier in 1918/1919 from a combination of the terms "light" and "chandelier." It moved to Jersey City into the Claremont Avenue building. Blitzer's son Moses formed a subsidiary of Lightolier under the name Corona for the production of lighting products and even lighting fixture shades. The first shades with tasseled fringe were designed by a Swedish immigrant Thure Dahl and was an immediate success for the company. The company progressed with a number of design series in the succeeding decades such as the Da-Ray series of pendants and torchieres in the 1920s. A pamphlet The Charm of a Light-Conditioned Home in 1924 helped to market Lightolier products with information about home lighting.

Moses Blitzer headed Lightolier after it moved to Jersey City; he also relocated its showroom to 36 Street in New York City in 1934. During the World War II era, fluorescent lighting greatly influenced the expansion of Lightolier as it entered into the production of items for commercial and institutional lighting. The company's creative work in the installation of the fixtures also became evident in its design of the ceiling for the Seagram Building, New York City, in 1958. Lytespan track lighting, developed in 1962, became a signature product for the lighting company. In the 1980s and 1990s, it advanced into the manufacture of the digital dimmer and lighting and energy controls.

Lightolier went public in 1969 and was purchased by Bairnco for $47 million in 1981. It had 700 employees at its Jersey City headquarters and factories and warehouses in ten cities. As part of its corporate restructuring, Lightolier left Jersey City for its new Lightolier/Genlyte headquarters at Secaucus Mill Creek Drive built by Hartz Mountain Industries in 1986. Lightolier joined the flagship division of The Genlyte Thomas Group LLC, a publicly traded company in 1998. The Genlyte Group was bought by Royal Philips in 2008.

The Jersey City Board of Education purchased the building for its administrative offices in 1986.