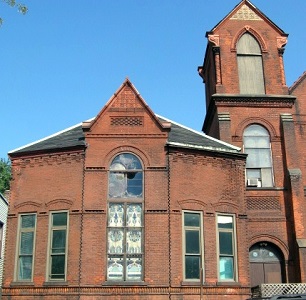 The oldest part of the Greenville Reformed Church
is the Chapel or Church Hall pictured above.
Photo: C. Karnoutsos, 2013 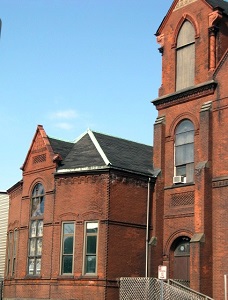 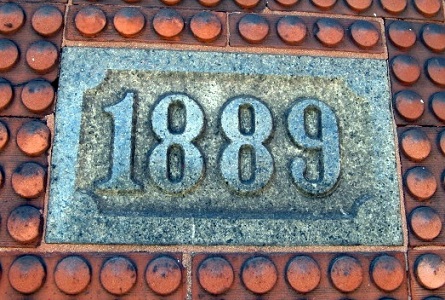 Cornerstone of the newer church. 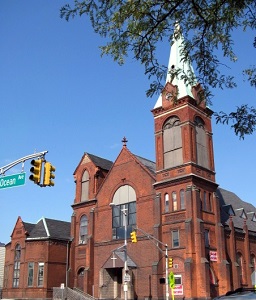 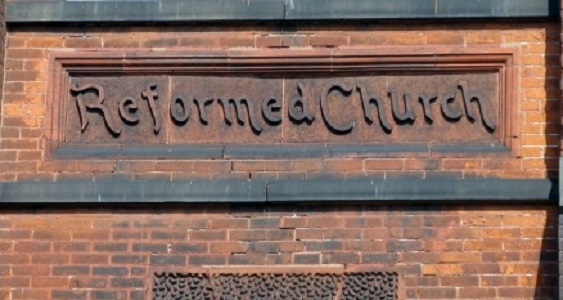 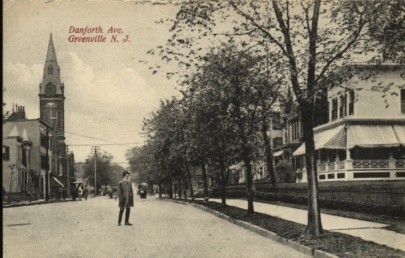 Postcard view of Danforth Avenue looking west toward Ocean Avenue.
The steeple of the Reformed Church can be seen at the left.
Courtesy, Jersey City Free Public Library

The Greenville Reformed Church had its beginnings with a generous gift by James Currie (1800-1870). Currie owned a large estate that extended from Old Bergen Road to the shores of Newark Bay giving Currie’s Woods its name. According to local historian Alexander McLean, Currie, “At his death, with christian [sic] foresight and liberality, bequeathed $1,000 or an acre of land to aid in the establishment of a church of the Reformed or Presbyterian denomination, whenever the people in the neighborhood should desire to effect such an organization (McLean 275).

The donation encouraged some 24 families to begin a Sabbath school in the Greenville school house in January of 1871 and proceed toward establishing the Reformed Church of Greenville, NJ. Among the elected leadership were S.B. Vreeland and Michael Terhune and William Currie, whose surnames survive as place names in Jersey City.

An additional $10,000 gift from Mr. and Mrs. Abram Becker in memory of their son went to the purchase of four and one-half lots on the southwest corner of Danforth and Ocean avenues (McLean 275). This funding allowed for construction of a chapel, marked with a cornerstone dated October 17, 1875, followed by a dedication on January 16, 1876.

The larger and present church on Ocean Avenue was not built until 1889. The architect Henry C. Palmer of Jersey City, a member of the congregation himself, drew up the plans for the new church. McLean describes the interior of the urban vernacular Romanesque Revival design building of red brick with terra cotta and bluestone as follows: “The main auditorium is 51 by 67 feet, unbroken by pillars or columns, the roof being supported by heavy trusses. The floor slants towards the platform, and the seats are arranged in a circle, giving ample room for 600 people” (276).

The original chapel was integrated into the larger structure as a church social hall and Sunday school facility. The chapel was extended by 28 by 30 feet and enlarged to 98 by 30 feet. The cost of the new church and the expansion of the old chapel was over $30,000.

The date of construction "1889" appears below the stained glass window near the corner of Danforth Avenue, and the name "Reformed Church" is engraved on the tower to the right of the main entrance. It is claimed that one of the church's stained glass windows was destroyed by the Black Tom Explosion in 1916. The present entrance, and its surround, appear to have been modified as the brick is of a different coloration than that of the original red brick.

Over the years, the Greenville church kept its identity separate from the Old Bergen Reformed Church by changing its name to the Reformed Church of Greenville and then the United Reformed Church, Greenville. As a result of population shifts in the city and cost of maintenance of the large facility, the church presently does not have a ministry or congregation in residence.