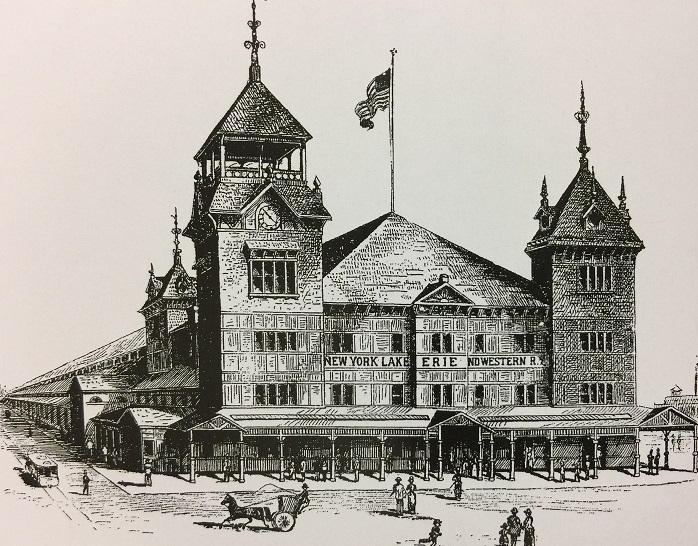 Erie Railroad Terminal Building was constructed in 1887 at the easternmost end of Pavonia Avenue along the Hudson River waterfront in Jersey City. 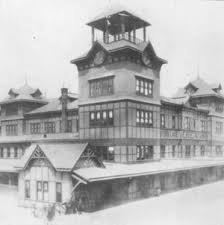 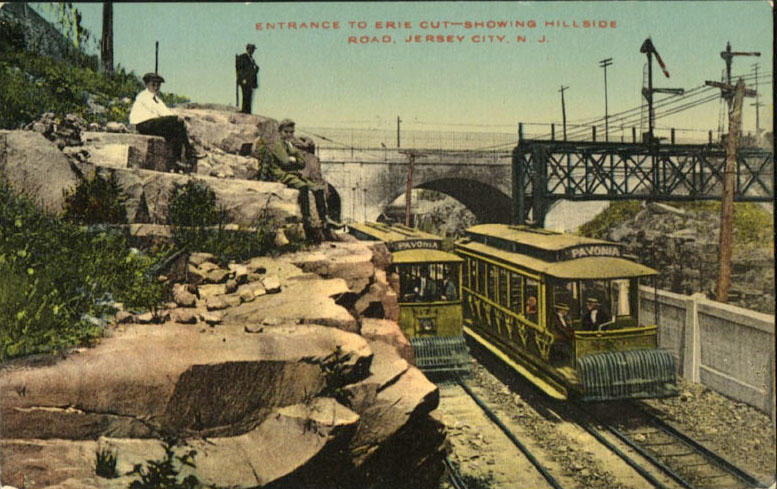 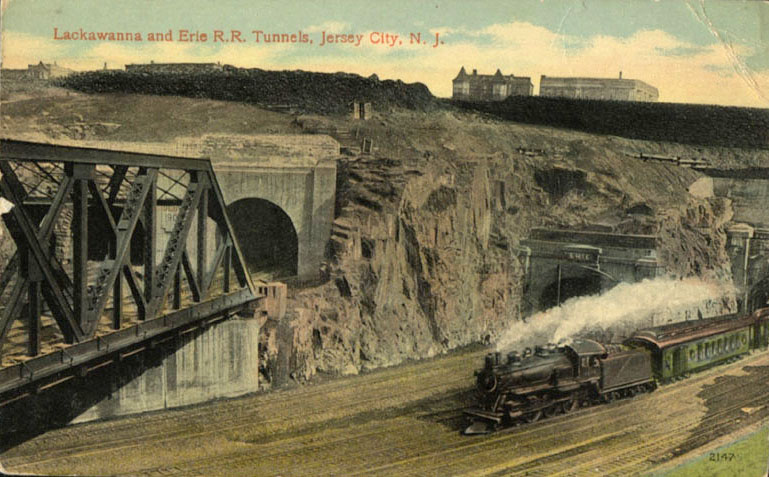 The letter "E" on the capitals of the columns at the Newport PATH Station gives local commuters evidence of the former New York, Lake Erie & Western Railroad Station, at the foot of Pavonia Avenue and the Hudson River. The terminal was built in the late 1880s for over $200,000 and razed in 1961. Today, the site is part of the larger Newport complex in Jersey City.

In 1832, the New York and Erie Railroad was incorporated to operate a railway line exclusively in New York State. In 1852, it began to make inroads into New Jersey through consolidation and mergers. It involved expansion to the Jersey City terminal owned by the New Jersey Railroad and Transportation Company incorporated in 1832. Local historian Joan Lovero explains, "In 1852 the New York and Erie Railroad leased the tracks of the Paterson and Hudson Rail Road and four years later bought more than 200 acres at Pavonia Avenue where it erected a new terminal on landfill. Because this site was more than a mile north of the old depot, the Erie decided to blast a tunnel through the Bergen hill and so avoid a circuitous route through the cut. The heavy expense of this difficult excavation, followed by the Panic of 1857, brought Erie to bankruptcy. It was rescued by an infusion of cash from a small New Jersey line, the Morris and Essex. . . Work resumed and in November 1860 a locomotive steamed through the first tunnel through the Bergen hill." (42).

In 1861, after bankruptcy and bailout, the railway became the "Erie Railroad," a name used through future consolidations and bankruptcies. The rail line completed the Bergen Tunnel for trains to the Jersey City waterfront. Three years later, Erie acquired the Pavonia Ferry Company of Jersey City begun in 1854 for $9,050. The ferry service ran between Pavonia Avenue in Jersey City and Chambers Street in lower Manhattan.

These and other transportation innovations began a significant period of growth in Jersey City. Between 1860 and 1870, the population grew 182.4% from 29,226 to 82,546, and to 120,722 or by 46.2% during the next decade. From 1868, the New York railroad magnate Cornelius Vanderbilt attempted to gain control of the Erie Railroad. It was controlled by the noted financiers, Daniel Drew, Jay Gould, and James Fisk, who tried to corner the company's stock by issuing 50,000 shares to flood the market.

After a New York court issued a warrant for their arrest, the three men reportedly left for a hotel in Jersey City. Gould, it is said, bribed the New York legislature to legalize their action. Fisk and Gould then agreed with Vanderbilt, and the railroad remained in their control with Gould as its president in 1868. The railroad, nonetheless, went into bankruptcy in 1875 amidst further scandal. It was sold for six million dollars and transferred to the Lake Erie and Western Railway in 1878. The Erie again went into bankruptcy in 1893. It was reorganized in 1895 as the Erie Rail Road Company. With the consolidation and expansion of mileage along the eastern seaboard, the railroad contracted with the Phoenix Bridge Co. in 1886 for the building of what was to be "one of the largest passenger train sheds in this country. . . . on the site of the old depot at the Pavonia terminus of the railway" (See Catskill Archive link below).

The Erie terminal opened to the public on December 4, 1887. That day, a New York Times article describes the "handsome" building with a center section and two wings as "three stories high, of the English Gothic style of architecture . . . replete with all modern conveniences; . . It has a frontage of 127 feet on Pavonia-avenue, and a river frontage of 120 feet. . . . The interior is finished in hard woods in their natural colors; light is afforded by spacious windows of cathedral stained glass. The train shed is 140 by 600 feet."

With its name "New York, Lake Erie & Western Railroad" engraved above the first floor, the station prominently displayed four towers. The tallest square tower featured clocks on two sides and a widow's walk above. On the first floor, passengers entered a waiting room facing the tracks, 66 feet by 1000 feet. It had a ticket office, ladies' waiting room, restaurant, and smoking room. Kenneth French in Railroads of Hoboken and Jersey City explains that between 1906 and 1910, the Erie dug a cut through the Bergen hill "to alleviate traffic and poor ventilation in the Bergen Tunnel [completed in 1861 and north of Dickinson High School], which ran parallel to it" (62). The 5,000-foot long, 85-foot deep, and 58-foot wide-cut runs between Kennedy Boulevard and Palisade Avenue. The name "Bergen arches" comes from a series of bridges or elevated streets over the cut.

On August 2, 1909, the Hudson and Manhattan Railroad, under the Hudson River (now PATH), opened the Erie (Tube) station at the Pavonia terminus to connect Jersey City with Lower Manhattan. Popularly known as the Hudson Tubes, it had other stations at Journal Square, Hoboken, Newark in New Jersey, and New York City.

By 1951, Erie's mainline extended from Jersey City to Chicago with branches to Scranton, Pennsylvania; Rochester and Buffalo, New York; and Cleveland and Dayton, Ohio. In 1954, the Hudson and Manhattan, at Pavonia Avenue, installed an innovative underground moving electronic sidewalk, 6-foot wide and 227-foot long, called the "Speedwalk," and built by the Goodyear Tire and Rubber Company ("Passenger Conveyor Belt to Be Installed in Erie Station." New York Times 6 October 1953).

The electronic sidewalk moves approximately 21,000 passengers from the mezzanine of the Hudson Tubes station to the Erie Railroad Terminal. The passenger conveyance, now common in airports, was seen as futuristic but could not save the terminal. Changes in local and commercial transportation patterns brought a decline in passenger use of the terminal. In 1956, the Erie Railroad moved out of the Pavonia terminal for the Lackawanna Terminal in Hoboken. The last train to depart from Jersey City's Pavonia Station was the Northern Branch train #1205 at 6:35 p.m., Friday, December 12, 1958.

In 1960 the Erie Railroad merged with the Delaware, Lackawanna and Western Railroads to become the Erie Lackawanna Railroad. The Erie Terminal was razed the following year after the New York, Susquehanna & Western Railroad withdrew its operations. For a time, the railway track remained intact to Piermont, NY. It brought passengers to Jersey City and serviced the Continental Can Company until it closed in the late 1970s. Its freight yards became part of the Newport waterfront redevelopment near the Port Authority's Railroad Pavonia Station.

In 1962, the Hudson Tubes ceded under financial pressure to the PATH for the rights to its operation in New York City for the development of the World Trade Center in Lower Manhattan. After 1988, the Pavonia tube station became a transfer station for the PATH, called the Pavonia or Pavonia Avenue Station. It was renamed the Pavonia/Newport station with the redevelopment of the Hudson River waterfront, ca. 2003, and then Newport station in 2010.