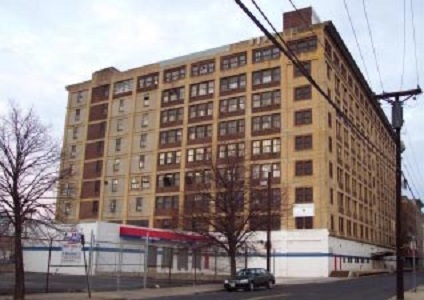 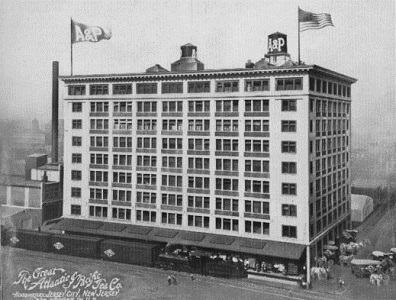 Provost Street between First and Bay Streets,
Near the Holland Tunnel and three blocks west of the Hudson River

The Great Atlantic & Pacific Tea Company is known as the "father of the chain store phenomenon."  According to journalist Gordon Bishop, "The A&P was the first nationwide chain, dating back to 1859, 20 years before Frank W. Woolworth founded his variety chain" (177).

Designed by Howard Chapman in 1907 and built by the Turner Construction Company, the former A&P warehouse covers 360,000 square feet of the Jersey City waterfront near the cobblestone historic district with other nineteenth-century industrial plants. The warehouse formed part of a five-unit manufacturing and distribution center that served the local A & P stores in New Jersey, New York and Long Island between 1900 and 1929.

The A&P was founded by George Huntington Hartford and George Francis Gilman, son of a shipowner who had a leather importing business. In 1859, Gilman and his worker Hartman opened a corner shop on Vesey Street in Lower Manhattan where the World Trade Center stood. They sold teas, coffees, spices, baking powder, condensed milk, and other groceries left in the holds of the clipper ships as well as leather products. By 1864, they formed the Great American Tea Company, having given up their leather trade. In the 1870s, it began to ship its goods via the nation's transcontinental railroad and changed its name to the Great Atlantic and Pacific Tea Company; it was incorporated in 1901. The chain had sixty-seven outlets, all with the familiar red and white façade that Frank W. Woolworth also chose for his variety of chain stores. By 1930, the supermarket chain had 16,000 stores nationwide.

Bishop describes the historic Jersey City warehouse as "a nine-story reinforced concrete structure of beam and girder construction and brick wall fill. Along each façade, the building's concrete piers and girders divide its face uniformly into bays, almost all of which hold either a double or triple window" (177). It has a massive dentil cornice on three sides. A loading dock on the ground level wraps around three sides of the building with sliding doors that lead to a metal-covered shed. The warehouse also includes eight large freight elevators, two passenger elevators, and a sprinkler system that was a modern safety feature for its time. The ninth floor on the Provost Street front had dining rooms and kitchens for employees as well as the coffee roasting machinery, for which the chain store was known.

The supermarket empire became known for its promotional marketing concept of branding.  The A&P brands were synonymous with certain store products, such as Ann Page and later Jane Parker Bakers for its baked good and Eight O'Clock and Red Circle for its familiar coffees.

The Jersey City buildings were sold in the late 1920s for the decentralization of A&P's national operation. The warehouse is now owned by Kaycel Reality in New York and has been repurposed with residential rental units and storage facilities.