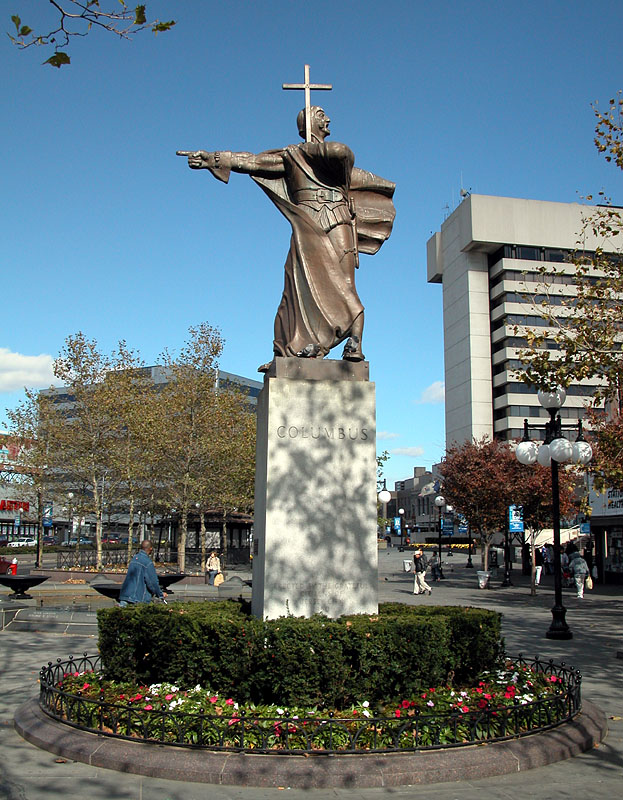 ﻿Designed by sculptor Archimedes Giacomantonio (1905-1988) of Jersey City, the ten-foot bronze statue of Christopher Columbus is mounted on a white marble shaft and was dedicated on October 15, 1950. Described as showing Columbus "in a militant pose, holding a cross in his left hand and pointing westward with his right," the statue honors the explorer and the Italian-American residents of Jersey City.

The statue was originally placed on one of the traffic islands on the Journal Square Bridge across from Loew's Theater. During the 1998 renovation of Journal Square, the statue was moved to the pedestrian plaza at the southern entrance to the PATH Transportation Center.

The sculptor Giacomantonio attended Dickinson High School. He trained at the da Vinci Art School in New York and the Royal Academy in Rome, Italy., and later maintained a studio in Jersey City at 194 Fairview Avenue.

Giacomantonio sculpted the statue of Abraham Lincoln "The Rail Splitter" (1925) for the lobby of Lincoln High School, "The Police Monument" (1935), and "The Wounded Soldier" (1947). President Harry Truman commissioned the artist to sculpt a statuette of Woodrow Wilson for the Truman Library in Missouri.