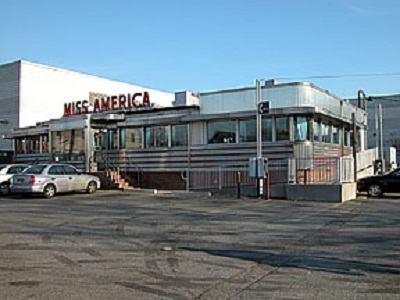 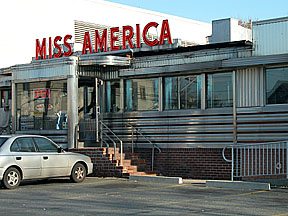 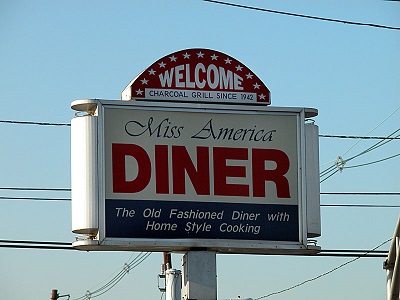 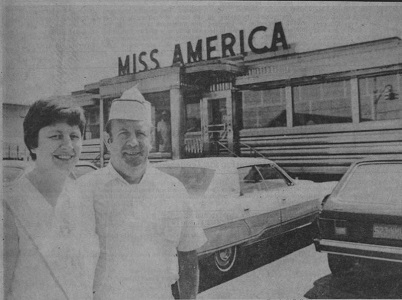 New Jersey is known for over 600 diners, more than any other state, and Jersey City has had its share: The Miss America Diner, White Mana Diner, Al’s Diner, Colonette Diner, Flamingo Restaurant, and VIP Diner. The Newark Avenue Diner (a Sterling Diner), at 361 Newark Avenue, appeared in the movie Wise Guys and was called the "Turnpike Diner." The Tunnel Diner (a Paramount Diner, ca. 1940) at 184 – 14th Street, near the Holland Tunnel, was used for the movie City Hall in 1976.

In 1872, Walter Scott of Rhode Island began the phenomenon of the fast-food eateries with a lunch wagon for workers in Providence. By the 1910s, lunch wagons evolved into popular stationary eateries that offered 24-hour service. Diners in the 1930s and 1940s had the art deco style with exterior construction of stainless steel, tile, and glass.  Formica paneling, counters and stools, booths with jukeboxes, and tables with napkin dispensers and ketchup became synonymous with the interiors of the diners.

The Miss America Diner is an example of the "Streamline" style of diner manufactured by Jerry O'Mahony during the 1940s. According to James P. Johnson, "In 1913, Bayonne's Jerry O'Mahony [1890-1969] noticed the resemblance between the local roadside lunch wagons and the railroad dining cars and coined the word diner" (113). His production of former trolleys or electric streetcars into restaurants, Johnson remarks, began in a local garage: "O'Mahony kept the wheels on his diners so they could both avoid building codes and change locations. . . . [He also] encouraged his buyers to leave the doors propped open to attract those who dreaded the male-dominated atmosphere. By the 1920s, O'Mahony and others added tables and booths to attract the fairer sex" (113-114). He moved his business to Elizabeth, NJ, and manufactured hundreds of diners there until 1956.

The Miss America Diner is "the best diner in New Jersey . . . . There’s no first runner-up either," writes Peter Genovese, author of works on roadside architecture (New Jersey Curiosities 32). In many respects, it meets Genovese's criteria for diners during their "golden age" in the 1940s: "Diners were long, low, 'fluid looking' structures with no hard edges, all corners were rounded. One design trade of this time: the generous use of reflective surfaces" (Jersey Diners 25).

With its classic-looking design and décor, the Miss America Diner has been the setting for several television commercials, including promotional campaigns for Cherry Seven-Up and Tums. The interior of the original section of the diner retains most of its original features such as the white Formica-paneled recessed ceiling with peach trim, peach patterned terrazzo floor, gray Formica counter, stools, tables, and lighting. The peach booths and wood blinds have been replaced and the jukeboxes and soda dispenser removed. Over the years, the favorite food choices of customers who call the Miss America "the Old-Fashioned Diner with the Home-Style Cooking" have been said to be its breakfast specials, meatloaf, and chocolate cream pie.

According to waitress Marilyn Borelli, a more than thirty-year veteran at the popular eatery, the diner dates back to 1942. It was originally called the Joe Cherico Diner for the owner. When Fritz Welte, a German immigrant, bought the diner from Cherico, he renamed it the Miss America Diner to honor his adopted home. A nephew, Alfred Welte, and his wife Helga Welte,  purchased the diner from Fritz. According to Mrs. Borelli, the diner was then sold to three individuals of Greek ancestry (Andy, Peter and Tony). Tom Carlis became the diner's next owner until he retired in 2002. In the early 1990s, Carlis and his co-owner Sam Galatis expanded the stainless steel diner with a 40-seat dining room decorated in blue Formica.

The next owner of the diner was Miquel and Monica Figueroa. In 2005, it was purchased by Christos Stamatis, the former owner of Constantine's Restaurant in Bayonne. In 2014, Tony Margetis bought the local landmark. He formerly owned the Colonette, a modern-style diner, on Rt. 440 in Jersey City.

The expansion of the New Jersey City University campus extends to the corner of Westside and Culver avenues near the Miss America Diner. It is bordered by the university's L-shaped Athletic and Fitness Center and serves the university community among its patrons.