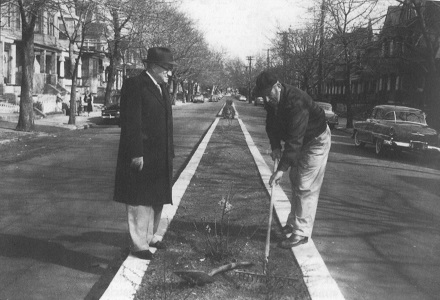 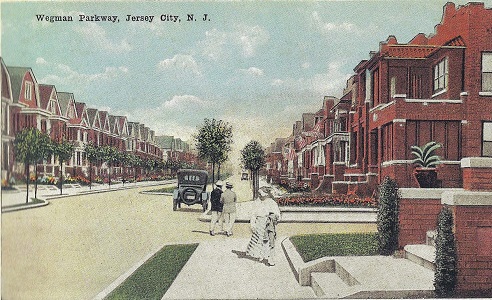 Wegman Parkway derived its name from Jersey City resident Dominicus Wegman and the efforts of the Wegman Place Improvement Association that lobbied the Jersey City Board of Commission to rename it in 1915.

In 1914 the association went before the Commission seeking recognition for its work to make Wegman Street the "nicest street in the city" (Jersey Journal 17 July 1914). As one of the widest streets in Greenville, Wegman's distinguishing feature was the placement of small islands in the center of the street. These were decorated with flowers and plantings that became the pride of homeowners' association. The association required Wegman Street property owners to maintain their lawns, hedges and flower beds; it put pressure on those who neglected these chores and even performed lawn maintenance for the laggards if necessary. The association was started by Isaac Klinghoffer who made it clear that if homeowners had neither the time nor the inclination to plant and clean their front and back yards, the association had a fund that would attend to the responsibility.

Buoyed by this neighborhood development, the association in 1915 sought a name change for the street that was befitting its goals and accomplishments. At its April 8 meeting, the Jersey City Commission approved the request and received the endorsement of Parks Commissioner A. Harry Moore who called Wegman Parkway "the most beautiful street in the city" (Jersey Journal 9 April 1915). Moore was on the City Commission from 1913 to 1925 when he successfully ran for his first of three terms as governor of New Jersey.