Jersey City Past and Present: Trust Company of New Jersey 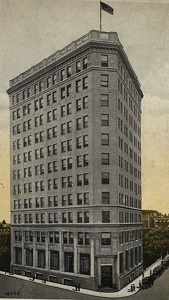 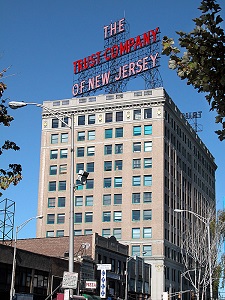 For many years, the bold red letters spelling out the name of THE TRUST COMPANY OF NEW JERSEY identified the location of the bank's flagship building at 35 Journal Square. The neon signs, mounted on scaffolding high atop the eleven story structure, at the time the highest lighting of the sky in Hudson County, could be seen from two different directions far into the distance. The bank's logo of a heart was added later, representing its slogan that it was the "The Bank with Heart since 1896."

The end of an era was marked in late 2004 when the gold compass star logo of North Fork bank replaced the old red signage of the Trust Company due to the merging of the two institutions. The North Fork sign was short-lived, as it was acquired soon after by Capital One Bank whose name featuring white lettering and a red "swoosh" logo now occupies the spot.

The original banking institution that occupied the Trust Building was founded by General William Heppenheimer. In the spring of 1896, he and three associates organized the People's Safe Deposit and Trust Company of Jersey City at the corner of Hutton Street and Central Avenue. Its success led to the banking firm known as "The Trust Company of New Jersey" started in Hoboken and then in Jersey City by 1899.

Heppenheimer served as the first chairman of the bank from its founding to 1930. Under his leadership, the bank expanded, and three trust companies (People's Safe Deposit and Trust Company, Bergen & Lafayette Trust Company, and the Carteret Trust Company) were consolidated and incorporated as The Trust Company of New Jersey in 1913 with one main office in Hoboken. It grew to be the third largest independent commercial bank by 1997.

Heppenheimer was also involved with the commercial development of Journal Square in the 1920s, and it is here that a new corporate headquarters for the bank was constructed. At the time, Its location promised investors access to commercial enterprises from nearby New York City as well other towns in the vicinity, all within reach from the trolley, bus and jitney lines, the Hudson and Manhattan Railroad Tube trains, and a branch of the Pennsylvania Railroad.

The bank building was designed by Col. J. Hollis Wells of Clinton & Russell Architects in New York City and was dedicated in 1927. The eleven-story, graceful Italian Renaissance-style office building represented the goal of prosperity for the Journal Square business district. The steel frame fire-proof structure was the highest building in Jersey City at the time it was completed. Constructed by the Hegeman-Harris Company, between 1898 and 1921, the exterior facade of limestone and brick was the work of the Benedict Stone Company.  With additions, the building is 201,000 square feet.

In 1922, Architecture and Building magazine describes the bank's interior design with its Doric columns, bronze teller cages, chandeliers and a mahogany decor: "The banking room, with an area of 5,000 square feet, has a height of 18 feet and its floor is a half story above the street. From the entrance vestibule, a broad flight of stairs leads to the banking room floor, where the central area and one side are occupied by the banking enclosures and the other avenue frontage by railed off office space for the bank officials. Marble [A.R. Zicha Marble Company] is used for floors and counter bases and the screens are bronze framed. From the paneled ceiling numerous ornamental pendant fixtures of the semi-direct type add to the decorative effect and give a diffused illumination. The trust department, safe deposit and vaults [Remington and Sherman Company] are in the basement which, being a half story above street level, has the advantage of more natural illumination than is the case where similar equipment is so located."

The building was renovated in 1992 with an upgrading of the elevators, heating, and air conditioning systems. Green awnings and new brass doors at the corner entrance were installed. Retail stores on building's the first floor face Bergen Avenue and the upper floors of the building have rental offices.

In 1969, Siggi B. Wilzig, a Holocaust survivor, became a director of the bank. Having made his fortune in the Wilshire Oil Company of Texas, Wilzig invested in the Trust Company and became its chairman and president in 1971. He retired as president and chief executive in 2002 but remained as its chairman until his death in 2003. He is memorialized as a benefactor of the Wilzig Hospital at the new Jersey City Medical Center that opened in May 2004.

From 2001, the bank was known as the Trustcompany Bank and its stock was publicly traded on the NASDAQ. It expanded to have 75 branches in nine counties in New Jersey, including eight branches in Jersey City.

Jersey City branches of the Trust Company were: The original People's Safe Deposit Branch at Central Avenue and Bowers Streets; the Bergen and Lafayette Branch at the corner of Monticello Avenue and Brinkerhoff Streets, a fine example of Beaux-Arts construction that opened in 1902; and the Greenville branch at the corner of Ocean and Lembeck Avenues that opened in 1927.

In May 2004, the Trust Company and its seventy-five branches were acquired by North Fork Bancorp of Long Island, NY, in a $726 million stock merger. In 2008 the building was purchased by New York real estate developers Sackman Enterprises with Capital One occupying the banking facility in the building.