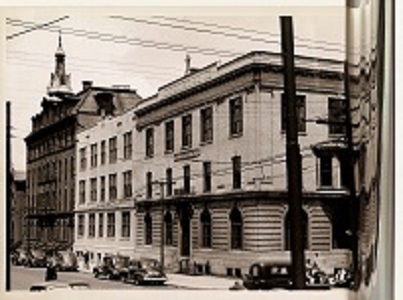 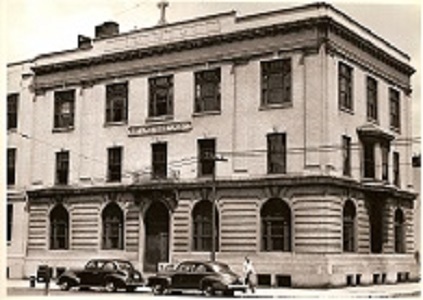 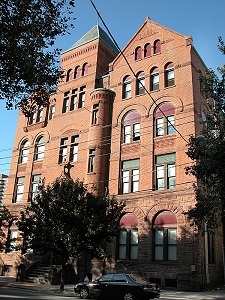 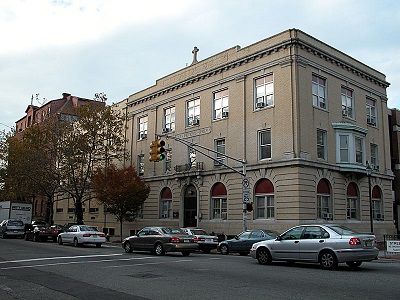 Saint Peter's Preparatory School (Prep) was originally one of three Departments (Collegiate, Preparatory, and Grammar) established within Saint Peter's College, which was chartered as a university by a special Act of the Legislature of New Jersey on April 3, 1872. The Jesuit College of New Jersey, Saint Peter's was founded as a liberal arts college for men. In the beginning, the school combined the preparatory school and the college: "Students generally entering the first year of prep school… [proceeded] through seven years, later eight, until a degree was granted" (Roehrenbeck 2).

The school opened on September 2, 1878, at the Saint Peter's College building on Grand Street with seventy-one students originally enrolled in the Preparatory Department. That number grew to 123 by year's end. Academic degrees were first conferred on June 25, 1889.

As more students arrived, work began on a new school building on Grand and Warren Streets. It was dedicated in 1913. Mulry Hall originally housed the Saint Peter's Club, a Jersey City social club, until Prep took possession of it around the turn of the century and transformed it into a classroom facility (http://www.spprep.org/).

In 1918, the College Department closed due to World War I and remained closed until 1930 because Jesuit superiors wanted to concentrate their manpower in other colleges on the East Coast. The Preparatory Department did not close at this time and continues to operate today as a Jesuit, Catholic, independent college preparatory school for boys in grades 9-12 at its original location at 144 Grand Street. The College and Prep were separately incorporated February 10, 1955 (Jesuit College in Jersey City 21).

The Humanities Building (previously known as the Science, Freshman, and English Building), was constructed in the late 1880s as the Academy of Saint Aloysius, an all-girls' school administered by the Sisters of Charity. The cornerstone was laid in 1889 (A Brief History of Saint Peter's Parish 3). Acquired by the Prep in 1924, this magnificent, four-story structure received a multi-million dollar facelift in 1995, which, most notably, included a floor-to-ceiling renovation of its Siperstein Library. The lower level houses physical education facilities, including a weight room, shower room and locker area. The upper three floors are devoted to classrooms and an art studio (http://www.spprep.org/).

Hogan (dedicated in 1942) and Burke (erected 1965-66) Halls contain most of the classrooms on the West Campus, with Hogan featuring the Link Computer Center and the Student Publications Center, and Burke containing science labs, a practice facility for the band and other music students, and the student cafeteria.

The Memorial Gymnasium, erected in 1948 on York Street, hosts all physical education classes, indoor intramurals, and home basketball, wrestling and volleyball contests. In the summer of 1995, this facility received an extensive renovation, which includes a refurbished hardwood court, new lighting, wall padding, a modernization of the women's restroom, and new game backboards, scoreboard and sound system (http://www.spprep.org/).

Recent additions to the campus include the James F. Keenan, S.J., Athletic Field, and the Warren Street Plaza. In addition, in 2005, Saint Peter's Prep purchased Saint Peter's Grammar School and Saint Peter's Church from the Archdiocese of Newark, NJ. A comprehensive Master Plan is currently underway to determine the best use of these tremendous new facilities.

The School Shield
The School Shield, first described in the December 3, 1954 issue of The Petroc (The Petroc, Volume 12, Issue 5), is an inverted Latin Cross which divides the field into four quarters. The field is maroon, the traditional color of royalty and nobility, Prep's honored color.

The inverted cross symbolizes the martyrdom of Saint Peter, the Prince of the Apostles and the Patron of the Prep. Tradition holds that the first Pope did not deem himself worthy to be crucified in the same position as his Master; so Peter died upside down, with his head in the dust of Rome. History proves that his gesture was not meaningless: within three centuries the city which had been the pagan capital of the world became the seat of the Christian empire.

The first quarter, the upper left hand section, bears the seal of the Society of Jesus, the Jesuit order that administers the school. The crown of thorns, encircles IHS (the first three letters of the name of 'Jesus' in Greek recalls that Christ is a crucified King). The three nails represent the vows of poverty, chastity and obedience by which the Jesuit binds himself to the service of the 'Victor King.'

The second quarter, the upper right hand side, represents the Papal authority to which the Society is dedicated by special vow and by which the Christian people are assured of infallible guidance in faith and morals. The Crossed Keys are Christ's own symbols of that authority according to his words spoken to Peter, 'I will give to thee the keys of the kingdom of Heaven. . .' The two lower quarters portray the fisherman's net and the apostolate of the Church and Society: 'I will make you fishers of men.'

The crest of the shield is the helmet of a Roman legionnaire, surmounting a wreath; it suggests the classical tradition of the Prep's educational system, and the location of the school. For the name Jersey is derived from Caesar; the original land grant in 1650 for the area that is now the state reads: 'Said tract of land is hereafter to be called by the name or names of Nova Caesarea, or New Jersey.'

The motto, 'Sub umbra Petri' is translated 'Under the shadow of Peter' and recalls the beautiful practice of the early Christians who brought their sick to Peter 'so that when Peter passed, his shadow at least might fall on some of them'. Under the same shadow Prep men live and learn" (Prep Men and Manners. . . 1966).

The Prep student body is composed of more than 900 young men from over 110 communities in New Jersey and New York City. The faculty is composed of 71 faculty members with 11 counselors, including 4 college placement counselors and one learning specialist (http://www.spprep.org/).

In 1898, football was introduced to Saint Peter's Prep; the first game results in a 0-0 tie against Dickinson (Petroc, Volume 11, No. 1). By 1931, the Prep Athletic Association had formally organized teams with full coaching staffs in Football, Baseball, Basketball and Tennis. Basketball and Indoor Baseball Intramural sports competition started in 1933 (College Catalogues 1931-1933).

By 1918, there was a junior debating society for high school students. In 1921, this group became the Beaudevin Debating Society for third and fourth year students, and in 1923, the Mulry Debating Society was created for first and second year students. 1922 marked the arrival of The Cephean, “a yearly record of our seniors and undergraduates.” And twenty-one years later, the first school newspaper was introduced. The Petroc, as it was called, was completely designed and edited by members of the student body, and was meant to be “For Prepsters and the Prep.” While religious, performing arts, debate, athletic and alumni clubs and societies were always part of the extracurricular programs, along with student publications, the 70s and 80s saw a great increase in these activities. Today’s extracurricular activities include organizations relating to community service, ethnicity, academic achievement, and to less popular hobbies—the Culinary Club, Independent Film Society, and Chess Club are some organizations that allow students the opportunity to pursue their unique interests.

A noteworthy program at the Prep is the Higher Achievement Program (HAP). It was founded in 1964 by Fr. John Browning, S.J., and since its inception has provided an unforgettable summer experience for some 4,000 young men from Jersey City and Hudson County in the months between their seventh and eighth grades. This unique five-week enrichment program combines academics, athletics and creative classroom techniques (including off site classroom experiences) while teaching that learning can be fun and exciting. The program attempts to reach as many boys as possible, with the goal of preparing the students for eighth grade while challenging some students with accelerated work. It provides a chance for academic and social growth, for maturity, and for making new friends in a small classroom environment.

The 12 full-time classroom teachers include current Saint Peter's Prep faculty members, faculty of other high schools, and current college students. Aiding the HAP faculty are 30 tutors who are HAP graduates currently enrolled at Prep. They provide one-on-one instruction and manage the afternoon athletic activities. Subjects include English, mathematics and writing, with "option" courses provided three afternoons each week. These are mini-courses on topics chosen by the teachers, with each student selecting the class that interests him. Option classes have included public speaking, musicology, HAP newspaper, chess, and a sports clinic for boys who wish to learn basic athletic skills. HAP concludes with a graduation ceremony, complete with diplomas and awards.

The 2008 Saint Peter's Prep Commencement, held on June 1, commemorated 130 years of Prep history at Grand and Warren. As with every other Jesuit school, Saint Peter's Preparatory School focuses on teaching its students how to think critically and on being intellectually competent, open to growth, religious, loving, and committed to doing justice. These concepts embody the five principles of the graduate at graduation.

Saint Peter's Preparatory School is part of the Jesuit Secondary Education Association (JSEA). There are 52 members of the JSEA in the United States. Saint Peter's is accredited by the Middle States Association of Colleges and Schools. It remains New Jersey's only Jesuit high school. As such, its graduates embody the hallmarks of Jesuit education. Put simply, the goal at Prep is to form men of competence, conscience, and compassionate commitment.