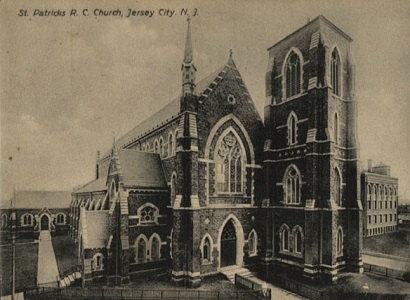 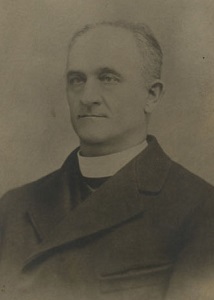 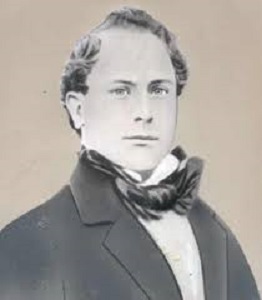 The stately Gothic Victorian-style structure at the corner of Bramhall and Grand Street is St. Patrick's R.C. Church. It is the largest church in Jersey City and the third largest in the Archdiocese of Newark in New Jersey. The church is not only known for its role in the community but also for the theater within its elementary school that was placed on the state and national registers of historic places in 1980.

One of the foremost ecclesiastical architects of his time, Patrick Charles Keely (1816-1896) of Brooklyn, NY, designed the corner church. He had emigrated to the US from County Tipperary, Ireland, in 1842 and became the major Catholic architect of the nineteenth century for his work on reportedly over 600 churches and cathedrals over his 50-year career. There are claims to Keely's design of some thirty churches in New Jersey. Locally they include St. Bridget's (1882-1890) and St. Michael's R. C. Churches (1869-72) in Jersey City and the Church of Saint Michael the Archangel (ca. 1875) in Union City. The Keely Society was founded in 1996 to document the life's work of the architect.

St. Patrick's Church was constructed with blue flintstone taken from the railroad "cut" in the Greenville section of Jersey City by the Central Railroad of New Jersey. The "cut" is presently used by the Hudson-Bergen Light Rail System. The silver-colored hammered granite from the Hallowell quarries in Maine highlights the door jambs, windows, buttress caps and cornices. The interior of the Gothic church features ribbed vaulting, with sixteen granite columns support the clerestory walls, a nave of 86 feet, side aisles, channel, side chapels, woodwork of black walnut and white ash, and stained glass windows, but no transept. The extreme length of the church is 272 feet and the extreme width is 138 feet; the spire rises to a height of 225 feet with a base 33-feet square.

The impetus for the founding of the congregation was the arrival of Irish immigrants. During the 1860s, Jersey City's Irish-Americans began to settle in greater numbers in the southeast section of the City of Bergen (prior to the formation of the municipality of Jersey City in 1869). The new residents attended St. Joseph's R.C. Church almost two miles away in Hudson City. This imposed a hardship for most to attend services. Bishop James R. Bayley then had St. Joseph's start a mission at the intersection of Communipaw Avenue and Bergen Point Plank Road (now Garfield Avenue) in 1868. The site later became the Tivoli Theater.

St. Joseph's Mission soon outgrew the facility and a new church was planned. The property "at the crest of Bergen Hill," at Bramhall Avenue and Grand Street, was purchased from Hugh McKay. The church was named for St. Patrick, the patron saint of Ireland. To honor the church's namesake, the five stained glass windows in the apse describe St. Patrick's life from his youth as a shepherd slave, his ministry in Ireland and holding of a shamrock, to a depiction of his death. The cornerstone for the church was laid on November 13, 1870, but due to limited finances it was not completed and dedicated (August 19) until 1877 at the cost of $300.000. The first pastor was the Reverend Patrick Hennessy who emigrated from Limerick, Ireland. He struggled with the difficult financial times to complete the church complex and, in appreciation by the congregation, was buried in a plot near the bell tower when he died in 1896.

The congregation donated the thirteen bells in the church tower; they are inscribed with the names of the nineteen soldiers from the congregation who died during World War I. The original stained glass windows were shattered by the Black Tom explosion in 1916 and had to be replaced. The replacement windows were made in Munich, Germany, by Mayer & Co.; there are nine on one side of the church and ten on the other.

Father Hennessy also started an elementary school for the congregation in 1871, but it was discontinued in 1877 due to a shortage of funds. The Second Renaissance Revival style school with a theater, located at 509 Bramhall Avenue, was begun in 1901 but was not completed until 1910; it was staffed by the Sisters of Charity. St. Patrick's merged with Assumption/All Saints School but was disbanded in 2011. The school building is now the Dr. Lena Edwards Academic Charter School.

The now-acclaimed theater at the school had fallen into disrepair after the 1940s, as resources for instruction took precedent over the theater's maintenance. After the church received designation as an historic landmark in 1980, a matching grant from the New Jersey Historic Trust in 1993 was received to preserve the three-story, 700-seat jewel-box auditorium. The architect Thomas P. Mc Ginty and the New York architectural firm of Beyer Blinder Belle were responsible for the restoration. It is one-third the size of the Shubert Theater on Broadway to which it is often compared. Similar to an opera house, it has an orchestra pit, mezzanine, and balcony seating. In 1999 it was dedicated to Jacques d'Amboise, a former principal with the New York City Ballet and founder of the National Dance Institute at St. Patrick's. The theater is used for the cultural education of children. Popular theater productions, the American Shakespearean Repertory Company, and Lenten religious dramas have been staged there.

True to its social mission, St. Patrick's continues to to serve the local neighborhood and new immigrants of Haitian and Central American descent.