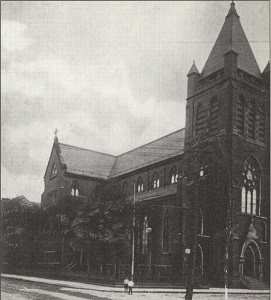 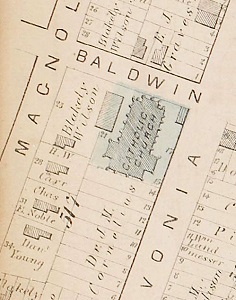 Detail of the 1873 Hopkins Atlas of Hudson County NJ showing the outline of St. Joseph's Church. 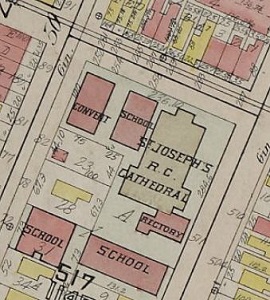 St. Joseph's Roman Catholic Parish was first organized in 1856 to serve the Irish immigrant workers who were laboring on the Erie Railroad tunnel under Bergen Hill. The workers lived in temporary shacks on the surface, close to the difficult and dangerous task of blasting through the bedrock below to create the tunnel. The parish is named in honor of St. Joseph, the patron saint of all such hard-working people.

Thousands of Irish Catholics were settling in the Jersey City area in the 1850's following the Great Hunger that drove them from their homeland. St. Peter's Roman Catholic Church on Grand Street, the parent church of all later Jersey City parishes, established two mission churches in the mid 1850's to serve the rapidly growing Catholic population beyond the Paulus Hook area.

The first mission, St. Mary's Chapel, was built in 1855 in the northern section of what was once Van Vorst Township. The second, St. Bridget's Chapel, opened in 1856 to serve the tunnel workers on the hilltop in what was then the newly independent municipality of Hudson City. It was the St. Bridget's Chapel community that became St. Joseph's Parish under the early guidance of its first appointed pastor, Reverend Aloysius Venuta.

St. Joseph's Church later established a mission church of its own in 1868 near the intersection of Communipaw and Garfield Avenues. This mission eventually evolved into St. Patrick's Church.

St. Joseph's Church today stands on the southeast corner of Pavonia and Baldwin Avenues and was officially dedicated on Sunday, September 14, 1873. Parish lore relates that the stones used in its construction were quarried locally out of the Palisades rock formation, possibly from the Erie Railroad tunnel debris. An earlier brick church stood on the same site and the smaller building remained open for Catholic worship while the the walls of the second larger edifice were constructed all around it.

A detailed and informative narrative history of St. Joseph's Parish entitled "A Legacy of Priests and People Together" can be found on the parish's own website. The essay, which includes archival images of past parish life, was written by Jersey City historian Dr. Barbara Burns Petrick.

Over the years, St. Joseph's Church has occasionally drawn public attention due to the phenomenon of the unexplained lights which are said to shine from the church's bell tower. More information and video highlights can be found on the parish website here.