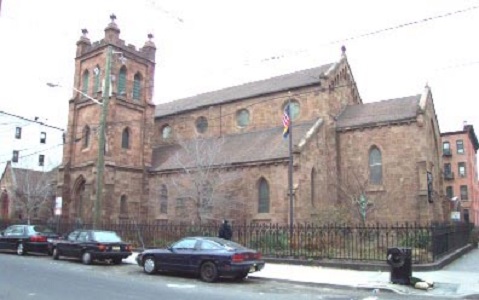 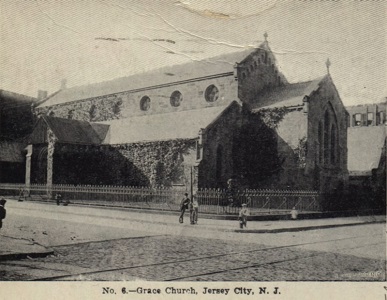 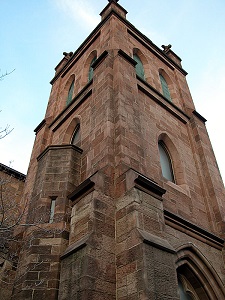 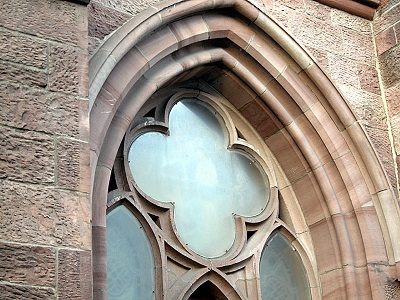 The Grace Church Van Vorst, at the corner of Erie and Second Streets, traces its beginnings back to 1847 when it was organized as the "Grace Church, in Van Vorst," the township from which it took its name. The congregation first held services at a local Baptist church and then at a church on Grove Street, near Newark Avenue. The church's present location on six lots began as a result of a bequest of three lots on Erie Street by Sarah Van Vorst, wife of Cornelius Van Vorst (1794-1852) and her daughters for the construction of the church. Members of the Van Vorst family continued to be benefactors of the church throughout its development. It became the second Episcopal church founded in the incorporated City of Jersey City in 1870.

It is an English Gothic-style Revival Episcopalian church designed by the architect Detlef Lienau. The one story building is constructed of coursed Belleville brown sandstone ashlar with bluestone trim, hammer dressed, with buttresses and ornamental work (McLean 279). Construction for the church began in 1850, and it was consecrated by the Rt. Rev. George D. Doane on May 6, 1853.

The church's architect Detlef Lienau (1818-1887) was born in Denmark. He was a founder of the American Institute of Architects and had an office at 111 Broadway in New York City. Lienau was known for the building of homes on Fifth Avenue and for his wealthy clients like August Belmont and the Astors. One such project was for Mary Mason Jones, the daughter of New York and Harlem Railroad founder John Mason and the great aunt of Edith Wharton, on the east side of Fifth Avenue from 55th to 56th Street, completed in 1871. The 1881 guidebook New York Illustrated called the row of eight olive-colored stone houses "the happy union of lightness with the idea of mass and dignity," which gave the buildings "a genial, homelike aspect" (Quoted in Gray).

Lienau's first design in Jersey City was a house for his brother Michael (today at Lienau Place in Jersey City Heights) in 1849. He also built the Mechanics and Traders Bank Building in 1859, the original First National Bank building at One Exchange Place in 1864, and the building that became the American Sugar Refinery at 174 Washington Street in 1863. Lienau's brother Michael was a member of the Grace Church Van Vorst congregation and the brother-in-law of Henry A. Booraem, the founder of the parish in 1847. Detlef Lienau lived in Jersey City and married Catherine Van Geissen on May 11, 1853, in the church he designed, a week before its official opening.

The exterior of the church has a pointed slate roof with gables surmounted by stone crosses and a clerestory of fourteen round windows. The baptistry on the southern facade had a groined ceiling and a circular staircase of cut stone (McLean 279). The baptistry is known as the Saint Margaret's Room, where the church archives are stored. Three additional lots were purchased for the needs of the growing congregation. In 1864 the church was expanded with two bays to the west by extending the nave and aisles allowing for additional seating; a Baptistry added midway on the south side features a groined ceiling. The brown stone rectory, adjacent to the church on Second Street, was also designed by Lienau in a style similar to the church and built in 1867.The Sunday school building, built in 1879, was added to the church on Erie Street.

An iron fence donated by Joseph McCoy was installed around the property in 1872. The 57-foot high, three-story, square tower with embattlement sides features finials surmounted by quatrefoil crosses at each corner and was added in 1912-13. A parish hall was attached to the northern facade in 1964, but it is not of the same architectural style as the main church.

The interior of the church has an open roof with arches resting on fourteen solid stone columns. Wainscoting, 173 pews, and other woodwork of black walnut accent the church, as do stained glass windows made in England, France and the United States. The original frescoes, donated by Benjamin Illingworth and John Van Vorst, were painted over in oil by J & R Lamb of New York City at the time of a needed renovation of the church in 1913. In an essay "The Muted Angels of Grace Church Van Vorst" (2010), preservationist John Gomez calls the "the main stained glass windows . . . to be the oldest of any sacred sanctuary in Jersey City" and "the forward right nave window is a memorial to Sarah Van Vorst . . ."

Gomez continues his description: "The early windows depict sleepy-eyed saints and angels reflecting the style of English Pre-Raphaelite artists such as Dante Gabriel Rossetti (1828-1855), while surrounding geometric patterns recall designs from Victorian pattern books. It is unknown what studio or studios created these unsigned windows but evidence suggests that Lienau himself may have supervised their creation, incorporating Gothic and motifs into the lower borders using the same elongated curves as in the actual structural supports throughout the church. The main windows, front and back, are thought to date to the time of the church's construction while memorial side windows were added over subsequent years by patrons who sponsored their fabrication in memory of departed loved ones."

In History of Jersey City, NJ,  Alexander McLean credits the leadership of the Rev. George S. Bennitt, an early Grace Church pastor, with what may have established the church's mission: "With the beginning of his rectorship [1887], Grace Church became a free church for all people, and under him has gone steadily onward, reaching out to every class in need of christian [sic] ministrations (279). Bennitt also served in the development of medical services in the city as president of Christ Hospital. The hospital began in a rented house from 1872. It was temporarily located on Magnolia Avenue and affiliated with the Episcopal Diocese of Newark. Through the efforts of Bennitt and others, land was acquired that led to the founding of the present hospital on Palisade Avenue.

Over the years, the parish has continued this legacy and has been involved with youth programs and other community-oriented outreach efforts such as the Interfaith Community Organization, a coalition of churches in Hudson County.