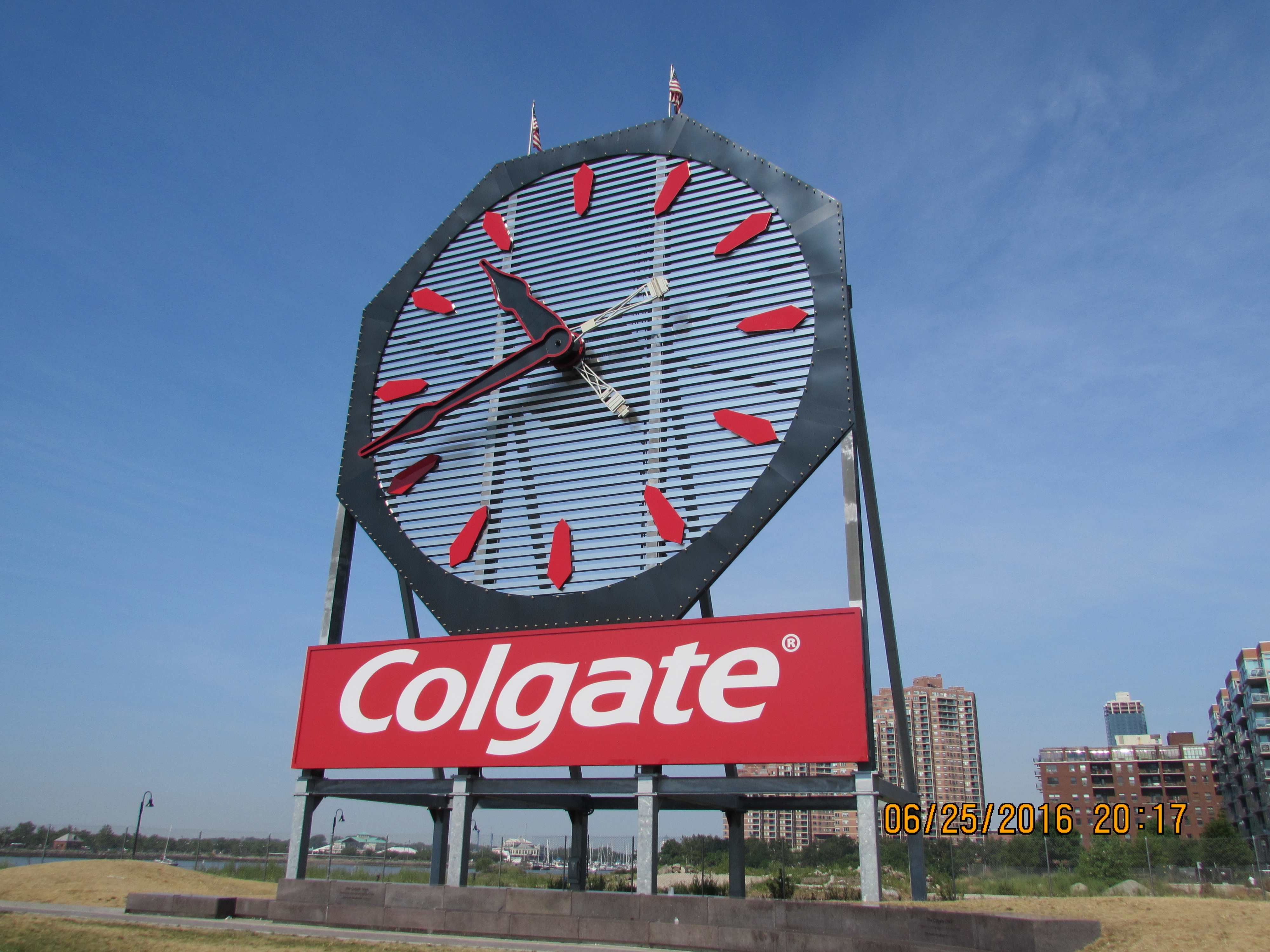 The Colgate Clock in its new location at the eastern foot of Essex Street.
Photo: C. Karnoutsos, 2016 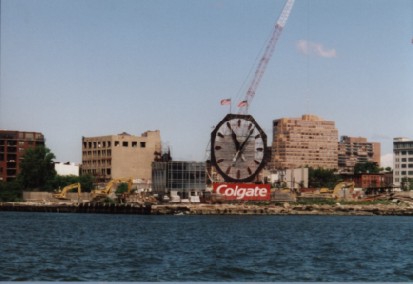 View of the Colgate Clock looking west from from the Hudson River
Photo: C. Karnoutsos, 2001 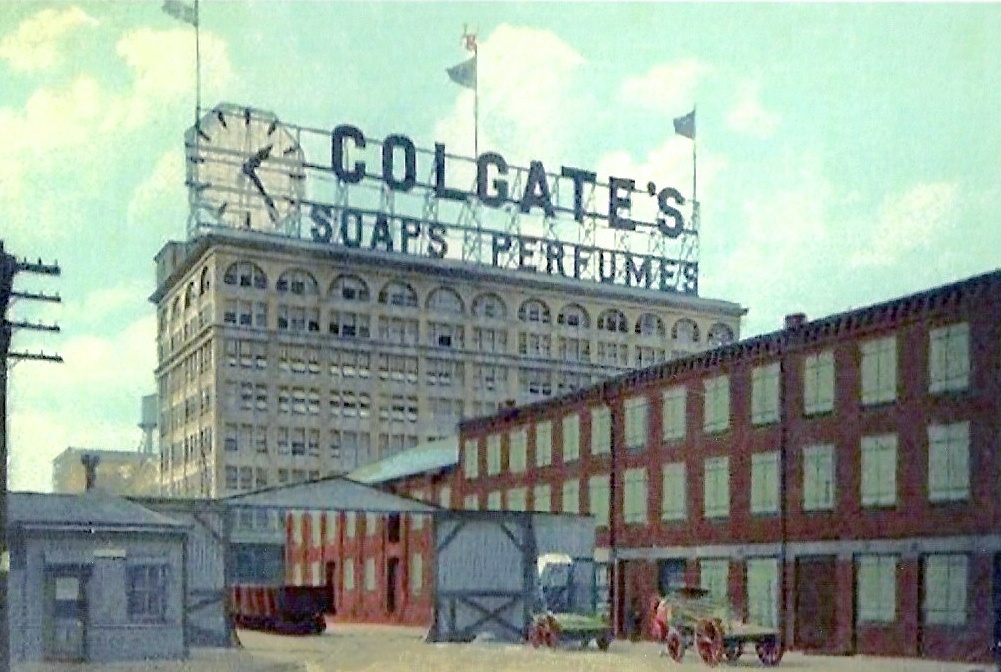 The familiar octagonal Colgate clock, facing Manhattan, dates back to 1924 when it was set in motion at noon on December 1 by Jersey City's Mayor Frank Hague. Located on the former site of Colgate-Palmolive & Company, it is a reminder of the time when factories dominated the Jersey City's waterfront. The clock's design was inspired by the shape of a bar of Octagon Soap, first manufactured by Colgate in 1887 as a laundry cleanser.

The surface of the clock is 1,963.5 square feet and 50 feet in diameter fitted in a framework of structural steel. The minute hand is 25 feet, 10 inches long; the hour hand is 20 feet long. They are mounted on a face of stainless steel slats. The timepiece can be adjusted and is maintained to stay within one minute of accurate time. There was a small master clock at Colgate's plant reception office that was checked against the US Naval Observatory in Washington, DC. The clock's mechanism is like that of a traditional wall clock with weights and wheels but was powered by twenty-eight rechargeable large-volt batteries.

After almost thirty-one years of enduring the elements, the clock was stopped at 9:30 a.m. on June 13, 1955, for repairs. A New York Times article reports that ". . . the laminated wooden hands, waterlogged on wet or humid days . . . , had Colgate mechanics bowlegged changing counterweights to keep the time just right. . . . Another fault had developed, too. The steel trusses that support the hands had rusted. The new clock hands will have an aluminum core with porcelained steel facing. They and the quarter-hour points will have fluorescent lighting when the clock get going again, instead of the old incandescents" (Meyer Berger, "About New York." New York Times 11 July 1955).

The replacement of the clock's hands took longer than expected, prompting hundreds of calls to the company by those counting on the clock to keep them on schedule. The installation finally took place on July 28 and July 29, and the dependable timepiece was operating again in a week ("New Hands on Big Clock." New York Times 30 July 1955). The dimensions to the hands were altered by counterbalances making for inconsistencies in published measurements of the timepiece.

Today's landmark clock replaces an earlier and smaller clock designed by Colgate engineer Warren Davy and built by the Seth Thomas Company for the centennial of the founding of Colgate in 1906. The clock, 38 feet in diameter, was made of structural steel and its face of stainless steel slats. It was part of an assembly, installed in 1908, that was set upon the roof of an eight-story warehouse at the southeast corner of York and Hudson Streets, which was also built for the company's anniversary. Engineer William P. Field designed the 200-foot-long and 40-foot-high sign for both the clock and advertisement "COLGATE'S SOAPS-PERFUMES" in 20-foot-high letters. It was illuminated at night by 1,607 bulbs emitting 28,000 watts of light. From the Jersey City waterfront, it was visible some twenty miles away to Staten Island and the Bronx. It received acclaim as an identifying symbol of the company as well as for its practicality. When replaced by the present-day clock, it was retired to Jeffersonville, Indiana.

The Colgate's Soap and Perfumery Works, later Colgate-Palmolive Peet, was founded by William Colgate in 1806. He began as a manufacturer of starch, soap and candles with a shop on John and Dutch Streets in New York City. When he moved his company to Paulus Hook (Jersey City) in 1820 to produce starch, it was referred to as "Colgate's Folly." The company instead flourished and had a sizable complex in Jersey City by 1847. It made chemically produced soap and perfume but eventually gave up perfume production. Upon the death of William Colgate in 1857, his son Samuel reorganized the company as Colgate & Company. It took on brand products such as Cashmere Bouquet, perhaps the first milled perfumed soap, and revolutionized dental care with toothpaste sold in jars in 1873. It also packaged toothpaste in a "collapsible" tube in 1896.

Jersey City became the corporate headquarters for Colgate in 1910. It merged with the Palmolive-Peet Company, previously separate soap manufacturers, and formed the Colgate-Palmolive-Peet Company in 1928. "Palmolive" came from the name of a soap made of palm and olive oil that was manufactured by the B.J. Johnson Soap Company. It changed its name for the popular soap that floated. The Peet Brothers' (William, Robert and James) Company of Kansas merged with Palmolive in 1926.

The Colgate-Palmolive-Peet Company was listed on the New York Stock Exchange in 1930 and occupied a modern plant for its time over a six-block area of York, Greene, Hudson and Grand Streets by the 1950s.

Overlooking the Hudson River, the octagonal Colgate clock and signage perched on a company structure remained unaltered until 1983. The signage "Soaps-Perfumes" was removed and a toothpaste tube, advertising one of Colgate's best selling products, took its place. Two years later and after 141 years in Jersey City, Colgate decided to leave, citing the need for improved facilities that its original manufacturing complex could not provide.

The entire complex was razed in 1988, and the clock, without the toothpaste tube, was lowered to ground level as a freestanding icon on the future Goldman Sachs property, where it stood for fifteen years. The 24-acre site became part of the redevelopment of the Jersey City waterfront at Exchange Place that began in the early 1990s.

The emblematic clock is now a permanent local landmark on a lot, south of the Goldman Sachs Tower, at the foot of Essex Street, that is leased to Colgate-Palmolive by the State of New Jersey. In June 2013, the clock, facing the waterfront, was removed and refitted with LED lights. The following September, it was affixed to a new foundation and platform inscribed "The Colgate Clock; Marking the Passage of Time since 1908; Colgate-Palmolve Company."  Colgate-Palmolive continues to own the timepiece with which it has become synonymous.