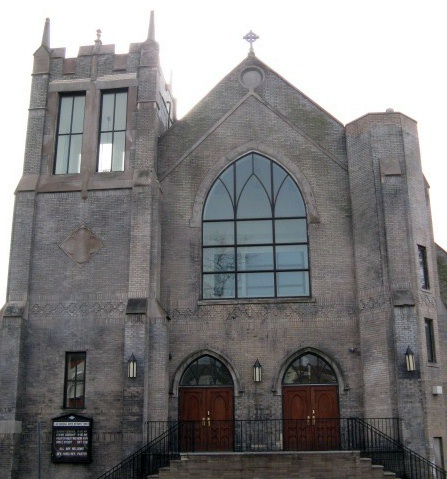 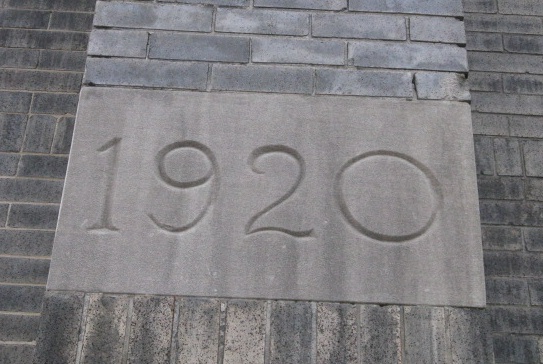 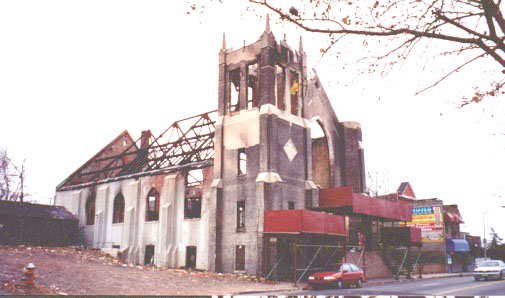 The restoration of Clair Memorial United Methodist Church--the first black church in Jersey City founded by African Americans--was completed in April 2011. Ten years after a 4-alarm fire destroyed the church and parish house to the side of the church, it has reopened to continue holding services for the community.

The historic church on Communipaw Avenue was designed by architect Abraham Davis of Jersey City in 1917. A Gothic Revival structure, it features a square tower, buttresses and arch windows typical for Episcopal churches at the beginning of the twentieth century. The church cornerstone indicating a “1920” founding does not represent its formation by the current occupant.

The present-day Clair Memorial congregation began in 1945 as a as result of the merger of two Methodist churches, St. Mark's A.M.E. Church--originally known as the "African Church"--and Thirkield Methodist Episcopal Church at Rose and Orient avenues in Jersey City
.
The congregation of approximately 140 worshipped there continuously until the morning of Tuesday, April 10, 2001, when fire ripped through the church leaving only the original brick walls, floor, steel structure and gaping holes in what was the roof and stained glass covering the gothic-style windows. Reacting to the tragedy, a newspaper article identified the church as "one of the most stable institution’s in the city's working class, largely black Bergen-Lafayette neighborhood since it was built" (New York Times 11 April 2001).

The next day, the board of trustees of Temple Beth-El, at the corner of Kennedy Boulevard and Harrison Avenue, offered a helping hand and invited the parishioners of Clair Memorial to hold their Easter service the following Sunday at the synagogue. This invitation was extended for Clair Memorial to hold its regular Sunday services in the temple's social hall until the work on the Communipaw Avenue church was completed. In recognition of this interfaith cooperation and willingness to open the synagogue to their neighbors, the Congress of Racial Equality (CORE) presented the two congregations with its 2001 Harmony Award "celebrating amicable relationships between whites and blacks" (Rinn).

On May 21, 2003, ground was broken for the $2.3 million rebuilding of Clair Memorial that was made possible from insurance revenue and fundraising. Architect Michael Campbell of Farmingdale, NJ, drew up the plans for the reconstruction of the church.

As pastor Rev. Hugo E. Rey planned for a celebration of the church’s reopening on April 16, 2011, he expressed optimism for continued growth of the congregation now possible with a larger seating capacity. Some of the original exterior structure has been used in the restored church. A new entrance was included as well as new stained glass panels in aluminum window frames and interior fixtures for the sanctuary.