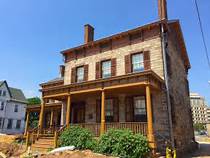 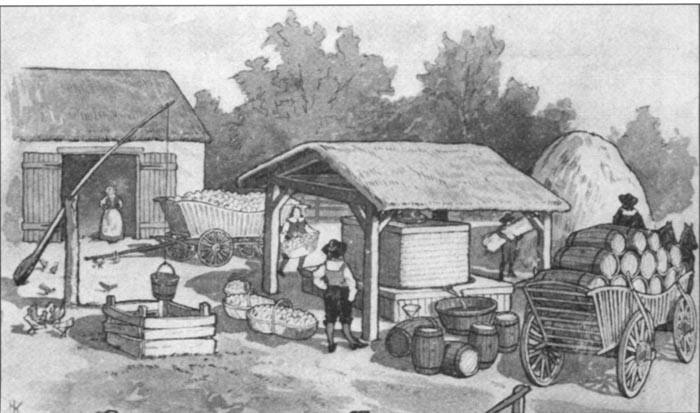 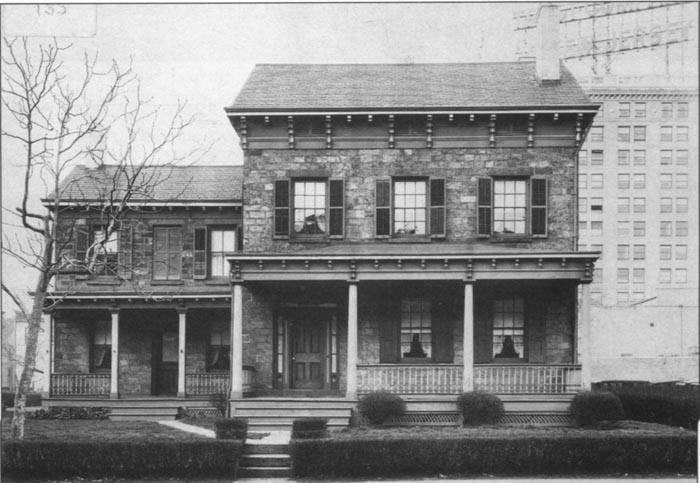 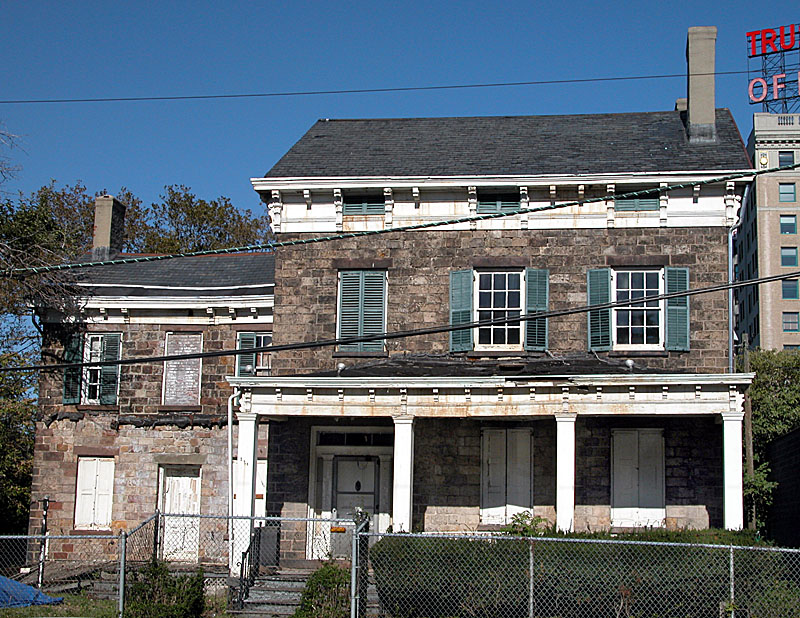 One of Jersey City's oldest and most historic houses is the well-known Van Wagenen/Apple Tree House. It has particular historical significance from its location, longevity, architectural development and the long-standing, but unproven legend, of a meeting between General George Washington and Major General Marquis de Lafayette under an apple tree during the American Revolutionary War. The landmark house that receives so much attention today was built in two sections and spans four different phases of construction.

On October 28, 2017, a ribbon-cutting ceremony marked the opening of the historic building as a museum and education center, featuring an exhibit of its history in photographs and documents. In attendance were Jersey City Mayor Steven Fulop and members of the Van Wagenen family.  The twelve-year long renovation of the exterior and interior of the Greek Revival house was to restore its appearance to its 1839-1879 period; it was directed by Holt Morgan Russell Architects with the Jersey City Landmarks Commission. Support for the $3.5 million restoration project has come from the Urban Enterprise Zone, Hudson County Open Space Fund and New Jersey Historic Trust. ​

Family History
The site of the house dates back to the seventeenth-century Dutch settlement of the village of Bergen, near present-day Bergen Avenue and south of Journal Square. It was conveyed to Gerrit Gerritsen by the English Governor Philip Carteret of colonial New Jersey in 1688. Carteret had agreed to honor the earlier land grants of the Dutch in the colony as well as the charter of Bergen.
Gerritsen arrived in New Netherland in 1659/1660. He settled in the village of Communipaw, where he seems to have lived until his death, which according to records of the Reformed Protestant Dutch Church of Bergen was in 1703. Gerritsen changed his surname to Van Wagenen; it reflected the name of his hometown Wagening in Holland and began the legacy of one of the first Dutch families who settled in the area.

In 1688, Gerritsen purchased plots in the village of Bergen in 1688. One of them was Lot 113 on which the Van Wagenen House was eventually constructed. It is described in the Van Wagenen House preservation plan by Holt Morgan Russell Architects (HMR) as “A narrow rectangular plot located in the middle of the block on what is now Academy Street and extending to the center of the northwest quadrant . . . . “ (11-1).

The Van Wagenen family members, patriots during the Revolutionary War, were active in the Reformed Dutch Church of Bergen. Their descendants were buried at the nearby Old Bergen Cemetery. In his will, Hartman Van Wagenen bestowed pew number 54 to his son Henry (1823-1900) as part of his inheritance. The executors of Henry’s estate sold the Academy Street property to his daughter Eliza Jane Cokelet in 1900. She lived there until her death in 1943 after which her grandson William Van Wagenen Cokelet inherited the house. When he sold the house in 1946/47, it marked 259 years of ownership of the property by the Van Wagenen-Cokelet family.

The new and last private owners were Lawrence G. Quinn, a funeral director, and his wife Mary, who purchased the property for Quinn’s Funeral Parlor. In 1995, the Quinns bestowed the house to the Provident Savings Bank who, in 1999, sold it to Jersey City for preservation after some consideration to replace it with a parking lot. In 1996, it had been listed on Preservation New Jersey's Top Ten Most Endangered Historic Sites, drawing attention to its significance to state and local history.

Building a Legend on Lot 113

According to the HMR study, “Whether built by Johannis, son of Gerrit Gerritsen, or under the tenure of Johannis’s son, Johannis, map research confirms that there was a house on Lot 113, the present location of the Van Wagenen House, by 1778 . . .” (III-13). The original building (western section) was a one-story, one-room deep farmhouse built of locally cut ashlar sandstone, with an upper gable end of wood. There was a cider press on the property and apple tree orchards nearby.

During the Revolutionary War, the location of the house on the heights across the Hudson River from the Loyalist stronghold of New York presented an opportunity for its use as the headquarters of Lafayette. Close by was the “point of rocks” that overlooked the river near the east end of Academy Street and provided an ideal vantage point for military reconnaissance.

Hartman Van Wagenen added the adjacent (eastern) section to the house ca. 1842. It was a two-and-one half story, eight-room building of ashlar sandstone and brick in Greek Revival style, popular during the early nineteenth century. Keeping with tradition, a gable roof of wood, typical of Dutch-style construction was chosen. Exterior features of the addition include a three-bay front, six-over-six windows and paneled shutters.

According to the DMR report, Hartman oversaw another addition, ca. 1860, to the western section of the house: “A brick second story and rear room was added, converting the one room deep, one story wing to a two story, two room deep section” (III-16). It also introduced the popular Italianate style of the time, as evidenced by bracketed cornices, in this phase of construction.

After the purchase of the property, the Quinn family made extensive renovations to the exterior and interior of the historic house for use as a funeral home, which included modern heating and air conditioning. It is claimed that Mary Quinn aimed to redecorate the interior in a style inspired by the décor of Colonial Williamsburg. Historic interest in the property saved it from being razed in the 1990s.

The often-repeated legend about the “Apple Tree House” is that General Washington and General Lafayette met there under an apple tree on the front yard to discuss war strategy where they shared a meal. The legend developed from varying accounts of the event over a span of time between the event and an interest by historians to reclaim the story.

We do know from their correspondence that both Washington and Lafayette were in Bergen between August 24-to-26, 1780. The purpose of their presence in Bergen was twofold: to goad the British into attacking Bergen from their stronghold in New York and to resolve the issue of supplies, called foraging, for the troops. While Washington and Lafayette similarly record the days’ events in their letters, absent is any reference to a meal enjoyed under an apple tree.

The Newark Sentinel first made mention of the legendary gastronomy on the occasion of Lafayette’s return to the United States for extended July 4th celebrations in 1824. On September 23, accompanied by New Jersey Governor Isaac H. Williamson, Lafayette reportedly entered Jersey City in a carriage drawn by four horses. He joined a parade to the Bergen Hotel at Five Corners, the center of the community, for the festivities.

The newspaper records that the Dominie John Cornelisen, pastor of the Dutch Reformed Church, presented Lafayette with a walking cane. It was made from the acclaimed apple tree that was felled during a storm on September 3, 1821. The cane is now on display at the Louvre Museum in Paris and bares the inscription: "Shaded the Hero, and his friend Washington in 1779--presented by the Corporation of Bergen in 1824." The date here is inaccurately given as 1779 instead of 1780. Cornelisen went on to explain that the cane was “. . . taken from an apple tree, under which you once dined and which once afforded you shelter from the piercing rays of noon [sic] day; . . . .” (Quoted in HMR III-20) It also clearly cites the location of the apple tree as “. . . at the parsonage at Bergen under which General Washington, General La Fayette and suite [sic] dined . . . .” (Quoted in HMR III-20). Reference to the Van Wagenen property is noticeably absent.

The HMR preservation plan refers to two secondary accounts of the Washington-Lafayette meeting in 1780. One is by M. Jules Cloquet in 1836 who claims they met at a breakfast but does not give the location. The other is by Benjamin Taylor, who wrote "Annals of the Classis of Bergen, of the Reformed Dutch Church and the Churches under Its Care” (1857). He provides the location of the apple tree to be “. . . in the orchard of the parsonage premises under whose shade he [Lafayette] had with other officers of the American army, dined . . . .” (Quoted in HMR III-21).

If such accounts refer to the parsonage location, how did the Van Wagenen estate enter the account leading to the long-standing legend? It seems to have started with writing of The History of Hudson County by Charles Winfield in 1874. He relied on The Newark Sentinel as his source and misstated the location of the Old Bergen parsonage in 1780.

By 1874, the year of Winfield's publication, a new parsonage at the northwest corner of Academy Street and Bergen Avenue (now a supermarket) was constructed. According to John Gomez of the Jersey City Landmarks Conservancy, "Winfield, who seemed to confuse the newer parsonage with the older one, resolved that the meal occurred behind the parsonage on the adjacent apple tree-lined Van Wagenen property" (Jersey Journal 1 June 2005). There was a cider press on the Van Wagenen homestead but not necessarily an orchard. Whether they dined alone or with other military officers as Taylor insinuates, i.e. General Nathaniel Greene and Major Henry "Light Horse Harry" Lee, has been questioned, but never proven.

At the time of Winfield’s writing of his work, Hartman Van Wagenen occupied the homestead as well as Lot 103 in the village of Bergen. It was known as "The Orchard" and opposite the parsonage in 1780 (HMR III-21). Local writer Harriet Phillips Eaton also kept the legend alive in her work Jersey City and Its Historic Sites (1899). She misinterpreted Benjamin Taylor about Lafayette using the house as his headquarters and the preparation of the legendary meal at the Van Wagenen property.

These and other accounts about the Van Wagenen property have found their way into many histories about the Revolutionary War and New Jersey. Without question, the legend has provided the added benefit of sustained interest in the property and its preservation for further study. The current archeological study of the site and restoration may provide new information about the property and insight into the Dutch settlement of Bergen and Jersey City's early history.