Jersey City Past and Present: Associates of the Jersey Company

Associates of the Jersey Company - Images 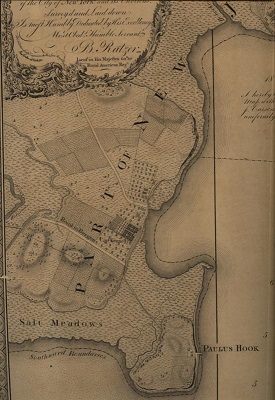 Commemorative postcard reproduction of the Revolutionary War era Ratzer Map. Details reveal the topography of the Paulus Hook area around the time that the property was purchased by the Associates of the Jersey Company in 1804. Paulus Hook itself can be seen on the lower right, surrounded by the salt marshes which separated it from the mainlaind. 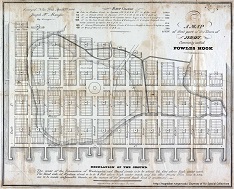 Detail from "A Map of that part of the Town of Jersey Commonly called Powles Hook", Joseph F. Mangin, City Surveyor, April 15 1804. 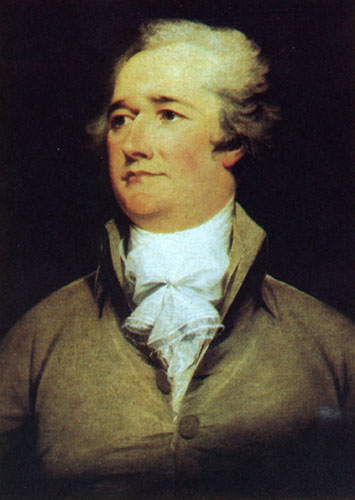 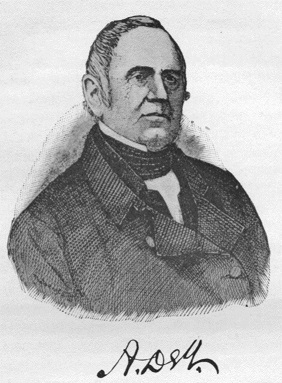 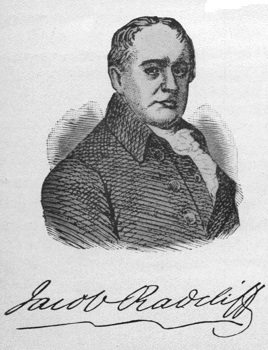 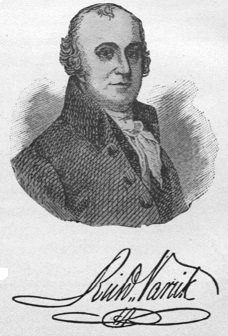 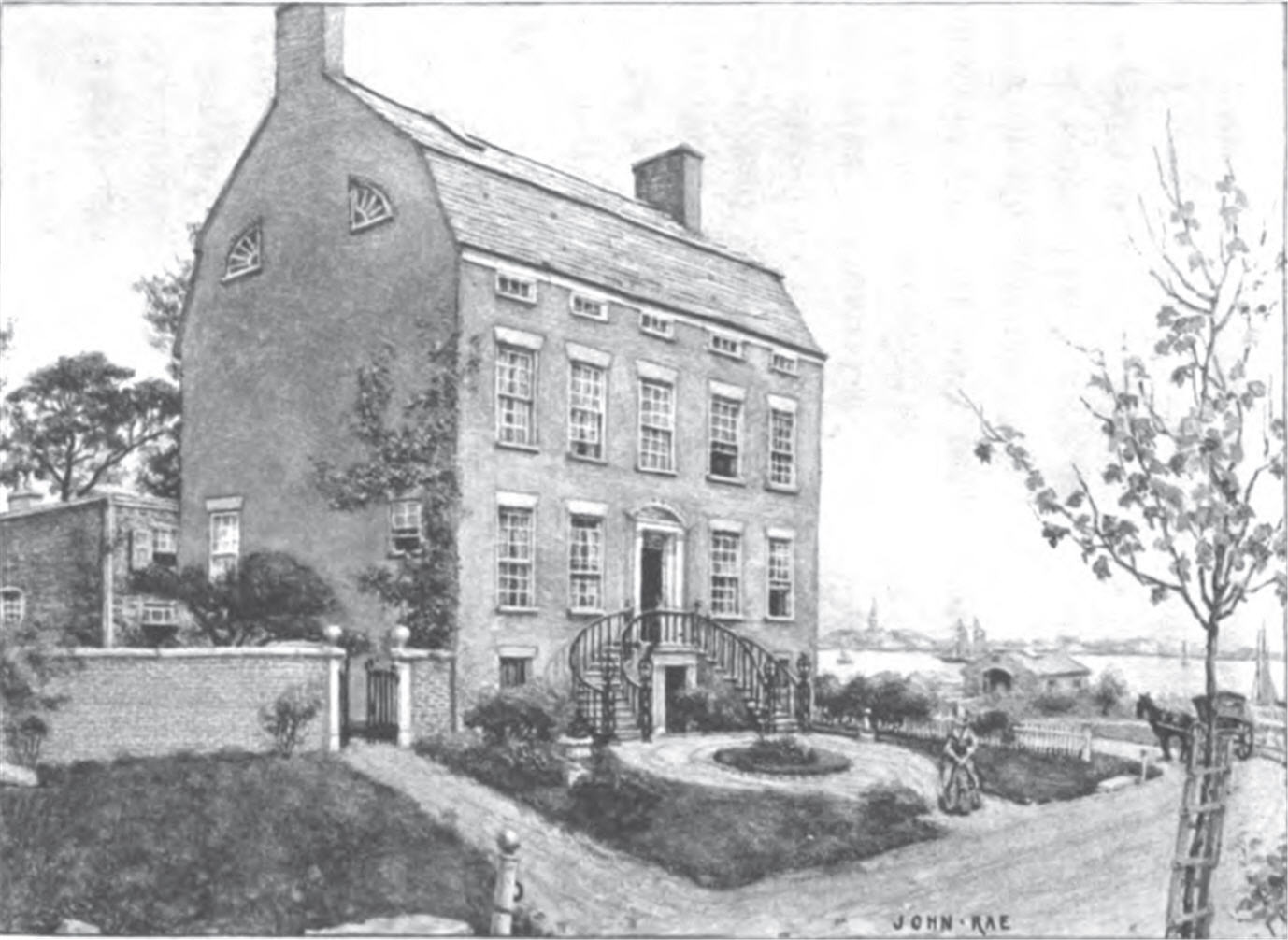 Artists rendering by John Rae of Prospect Hall
the Essex Street home of Col. Richard Varick,
one of the charter members of
the Associates of the Jersey Company.

Associates of the Jersey Company

The Associates of the Jersey Company was founded by a group of proprietors in 1804 with the intention to purchase property at Paulus Hook. It was the idea of Alexander Hamilton of New York, the first US Secretary of the Treasury under President George Washington. Hamilton believed in the future of manufacturing for the American nation and looked over to New Jersey for a location suitable to fulfill that goal. He convinced other New Yorkers of this idea. They, like him, were Federalists who had lost out in American politics with the election of Thomas Jefferson and other Democratic-Republicans in the election of 1800.

Anthony Dey, a lawyer, purchased land at Paulus Hook with ferry privileges from Cornelius Van Vorst. The property was surveyed, laid out into streets and blocks before the transfer of title to three prominent Federalists: Colonel Richard Varick, a lawyer and former New York City mayor, 1789-1801, and Dey's cousin; Jacob Radcliff, a Justice of the New York Supreme Court and later mayor of New York City, 1810-1811; and Dey, a large real estate holder. They each held 100 shares in the Company and were to receive an annuity from the rental of the lots and the ferry at Paulus Hook. There were also 31 share owners of lesser amounts, such as four New Jersey governors--Joseph Bloomfield, Aaron Ogden, William S. Pennington, and Isaac H. Williamson--as well as Alex C. McWhorter, Elisha Boudinot, John C. Coles, and Samuel Pennington. Hamilton initially acted as attorney for the group and drew up the charter of incorporation. It was approved by the New Jersey Legislature on November 10, 1804. Hamilton, who was killed in a duel with New York rival Aaron Burr in Weehawken in July of that year, did not live to guide the organization he helped found.

On May 4, 1805, William Halsey proposed the building of two frame houses with brick fronts on the property. The Jersey Company also planned a hotel on Grand Street; it was later known as the Hudson House and became part of the Colgate complex. They ordered shade trees and made plans for a shipyard, churches, a school, public market, and wells for water. Isaac Edge applied for lots to erect a grist mill. It stood at the westerly end of the new depot of the Pennsylvania Railroad.

In 1816, Colonel Richard Varick purchased lots 20, 22, and 24, on the north side of Essex Street, and built a brick house known as "Prospect Hall," overlooking the Hudson River. The property was landscaped with lawns and gardens to the waterfront. Major General Marquis de Lafayette visited his former Revolutionary War comrade Col. Varick at Prospect Hall, while touring America in 1824 for special Fourth of July celebrations. Varick lived at Prospect Hall until he died on July 30, 1831. The building was altered over time and became tenement housing. Eventually the structure was demolished.

The overall project planned by the Associates of the Jersey Company was not successful, and investors, such as the Jersey Steam Boat Ferry Company, failed. This was due to several factors. The State of New Jersey and the City of New York continued to claim control of land and coastal water to the New Jersey shore at Jersey City. This discouraged investment by those who wanted lots on the waterfront for commercial purposes. In June 1804, Hamilton and his law partner, Josiah Ogden Hoffman, challenged New York's claim, but press coverage over the controversy kept investors away. Also, the shareholders of the Associates of the Jersey Company required a rental charge to cover the annuity approved in its Articles of Agreement. Additionally, the Associates, who owned the land, had municipal governing rights to make regulations for the tenants or residents on the property.

The boundary dispute between New York and New Jersey was clarified in the Treaty of 1834 and with it the purchase of the Van Vorst mortgage by Colonel Varick and an agreement to sell the lots in full. According to the treaty, the rights of New Jersey to the land under the water of the Hudson River were conceded by the State of New York. However, by this time, the impetus for the Associates of the Jersey Company's plans and the original leadership were lost.

While the prospects of the Associates of the Jersey Company did not live up to expectations, it made a contribution to the founding of Jersey City. In 1819, the Jersey Company applied to the New Jersey Legislature to incorporate the Town of Jersey. The legislature enacted "An Act to incorporate the City of Jersey, in the County of Bergen" on January 28, 1820. The City of Jersey became "Jersey City" due to the use of the expression in the body of the legislation. Under the provision, five freeholders were to be chosen as "the Board of Selectmen of Jersey City," thereby establishing the first governing body of the emerging municipality. Also, the legislation included nothing that might impede the work of the Jersey Company. In 1829, the city's name was formally changed to "Jersey City" under a second charter of incorporation.

Associates of the Jersey Company References

Winfield, Charles H. A Monograph of the Founding of Jersey City. New York: The Caxton Press, 1891.