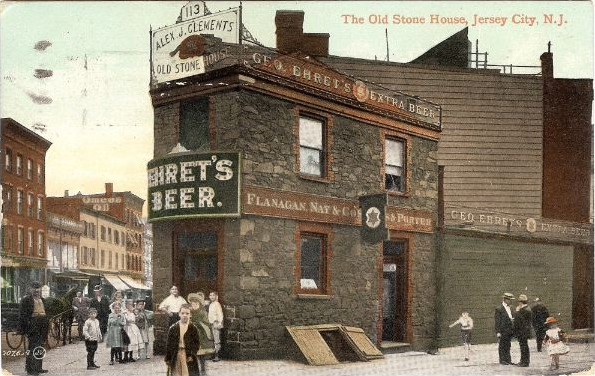 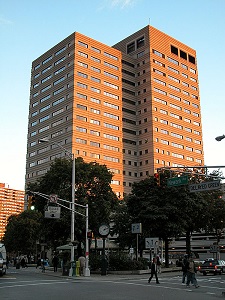 Fitzgerald-Holota Memorial Park and the Grove Street PATH station in the foreground; the Mack-Cali Realty Corporation building at 95 Christopher Columbus Drive rises in the background.
Photo: A. Selvaggio, 2002 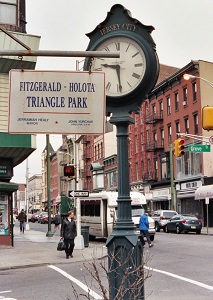 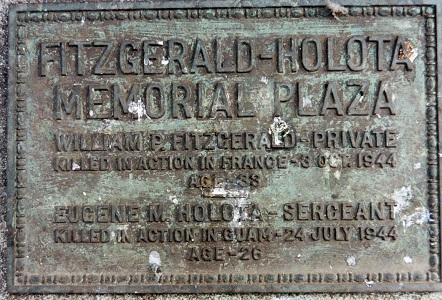 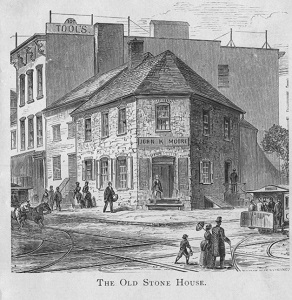 Lithograph of the Old Stone House at the southeast corner of Newark Avenue and Grove Street.
Source: H. Eaton, Jersey City and Its Historic Sites

Thousands of commuters daily pass through a triangular-shaped plaza as they wait for a bus or use the Grove Street PATH station. Little is known about the early history of this small municipal park called Grove Plaza in the downtown section of Jersey City.

The intersection of today's Newark Avenue, Christopher Columbus Drive, and Grove Street has served as a crossroad for the city since 1841. Christopher Columbus Drive was originally called Railroad Avenue. Here Jersey City's early railroads ran at grade level along the thoroughfare and later followed the length of the street on elevated tracks from the waterfront westward. Today, the PATH train tracks run underground following the same right-of-way of the railroad.

The small park pulled together the dispersed settled areas in the Van Vorst Township. It was once the site of a four-story tenement building and the Old Stone House, a tavern owned by a Democratic Party freeholder "Sandy" Clements. Cornelius Van Vorst, among others, found the town in 1841 on land settled in 1638. It was adjacent to old Jersey City and extended south

In the 1910s, the Old Stone House, along with the cigar store of Philip Muldoon at Grove Street and Morgan Street, was known as a "political center" of Jersey City. Here Democratic party supporters gathered to listen to political boss Robert "Bob" Davis in a room behind the cigar store. A fire alarm was located at Grove Plaza. It sounded the alert for the "buffaloes" or "men at call," as the volunteers were called, to assist the understaffed fire department. It was removed at the turn of the twentieth century.

In 1947, the .13 acre park became the Fitzgerald-Holota Memorial Park. It was renamed and dedicated for two Jersey City soldiers killed in action during World War II. Pvt. William Fitzgerald served with the 141st Infantry of the 38th Division of the US Army and died in France on October 3, 1944. He was awarded the Purple Heart posthumously, the Combat Infantryman's Badge, the Good Conduct Medal, and the European Theater ribbon. Sgt. Eugene M. Holota served with the 77th Infantry Division and died on the island of Guam on July 24, 1944. He was awarded the Good Conduct Medal, the Expert Infantry Badge, the Asiatic-Pacific Campaign Medal, and posthumously the Purple Heart.

The heavily trafficked intersection frequently requires a facelift. In 1969, the Port Authority of New York and New Jersey moved the entrance to the Grove Street station on the triangular property. In 1970, a twenty-five-foot flagpole, fences, trees, and other greenery completed the park. The renovation by the Port Authority was a gift to the city.

In 1996, the Van Vorst Alliance, founded in 1992, renovated the park with support from a Green Acres/Green Trust grant of $380,000. In 2007, the park again was renovated with the construction of Grove Pointe, a 29-story apartment building, near the Grove Street PATH Station on Newark Avenue.