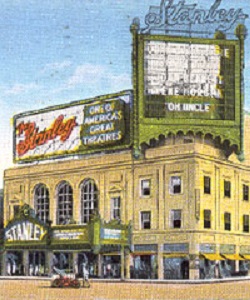 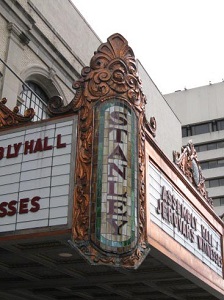 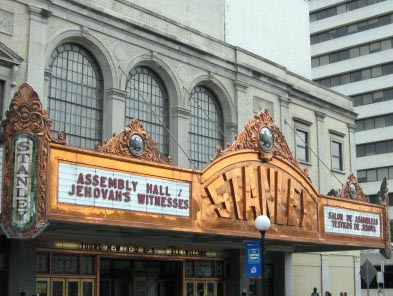 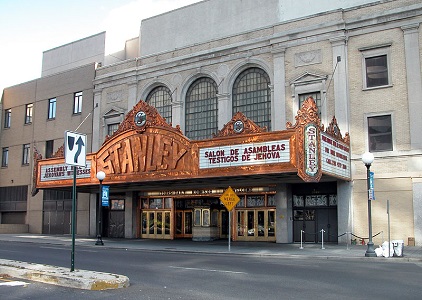 The Stanley Theater
2932 Kennedy Boulevard, corner of Pavonia Avenue and the Boulevard
at Journal Square

A massive Gothic-style structure, the Stanley Theater was built as a vaudeville and movie house in 1928. The 4,300-seat amphitheater is second in size on the East Coast to Radio City Music Hall built in 1932. Jacob Fabian of Paterson, noted for theater construction in New Jersey, commissioned Fred Wesley Wentworth of Wentworth and (Frederick J.) Vreeland to build the movie palace.

A glittering copper marquee spans the entrance, overhanging the solid brass doors. Over the marquee are three large arched windows. Building materials include marble from Italy, Vermont, and Texas, limestone from Indiana, and granite from Maine to face the Corinthian columns.

The impressive interior has a three-story lobby adorned with columns, a broad center staircase with trompe l'oeil alabaster handrails and balusters, lamps, velvet drapes, and stained glass windows of faux "Chartre Blue" in the foyer. Allegorical paintings by Hungarian muralist Willy Pagany adorn the ceiling and walls. The larger of two crystal chandeliers, suspended from the second floor, is from the New York's original Waldorf Astoria of the 1880s. At thirteen-feet tall and ten-feet wide, it is illuminated by 144 bulbs that reflect onto 4,500 hanging crystal teardrops.

Viennese architect John Eberson contributed to the design of the auditorium. Here, theatergoers enter the environment of an evening in Venice with a replica of the Rialto Bridge spanning the stage. Above the seating is an eighty-five-foot ceiling that permits an open sky effect with stars and moving clouds, originally effected by a projecting device, called a "Bronkort Bronograph," costing $290. Lighted stained glass windows line the walls with grottos, arches, and columns simulating the courtyard motif.

The theater opened to the public on March 22, 1928. Mayor Frank Hague attended the ceremonies that evening and, with the audience, was greeted on the screen by actress Norma Tallmadge. An orchestral performance, a stage show called "Sky Blues," a newsreel, and a musical piece on the Wurlitzer organ, preceded the showing of The Dove starring Tallmadge and Gilbert Roland.

Stage shows at the theater reflected the popular culture of the times with entertainers that ranged from the Three Stooges and Jimmy Durante to Tony Bennett, Janis Joplin, Dolly Parton, and The Grateful Dead. In the 1970s, movie attendance suffered from new forms of entertainment available to the public. The theater continued under the management of RKO General with the showing of foreign films on a rental basis and closed-circuit sports broadcasts. But the theater closed its box office in April 1978, with a showing of The Last Survivor and Rolling Thunder.

The future of the building was in question until it was purchased as a Jehovah's Witness Convention Hall for $18 million in 1983. Thousands of volunteers worked over a nine-month period to renovate and clean the theater for its first assembly in August 1985. Seven years later, the Jehovah's Witnesses expanded onto the adjoining property. The three-story building houses the administrative offices, additional auditorium, and dining areas. Tours of the former theater are conducted daily.

Other Jersey City theaters of the past were: The State Theatre (April 25-1922-1990) at Journal Square; The Pix on Bergen Avenue; and Roosevelt Drive-in at Rte. 440.