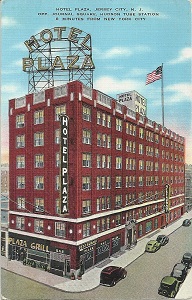 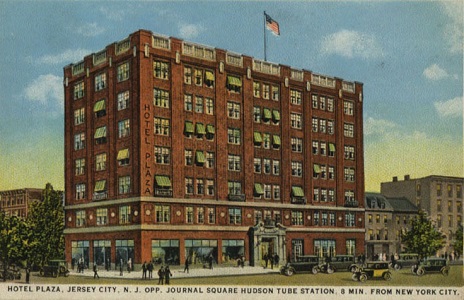 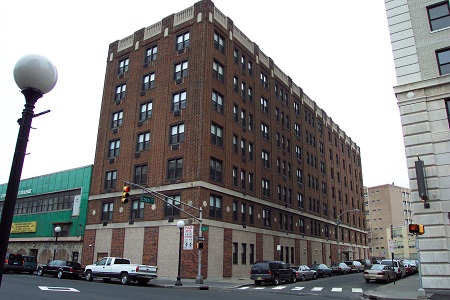 Designed by Clinton and Russell of New York City, the seven-story Hotel Plaza opened in 1924. It was built under the supervision of architects William Neuman & Sons for the post-World War I rebuilding of Journal Square by the Plaza Apartment Hotel Corporation of New Jersey.

The hotel structure features toned red brick trimmed with limestone and white marble. It had a marquee over the entrance on Sip Avenue and a colonial-style main entrance and lobby on Enos Place. An addition to the building was built in 1928.

As a full-service hotel, it had 190 rooms, 160 baths, and several dining rooms like the Wedgewood Dining room, Cocktail Lounge, and Grill and Men's Bar. The banquet hall, decorated in French and Italian Renaissance style, became the gathering place for social and political events in Jersey City. The local Lions Club, Rotary Club, and United Way, among others, met there for fifty years.

Political leaders frequently staged rallies in the ballroom. Hague held his annual "speaker's bureau" there, delivering his pitch to ward leaders and committeemen and women about the upcoming elections. Those who either disagreed with the mayor or disrupted the meeting were physically ejected to the streets. Years later, Jacqueline Kennedy came to the ballroom during John F. Kennedy's presidential campaign. Adam Clayton Powell campaigned there during Robert F. Kennedy's bid for the White House. C.J. Ingram, the radio editor of the Jersey Journal, hosted a variety show from the ballroom on Sundays in the 1930s and 1940s. It was broadcast over Radio WAAT in the Universal Building at the rear of the nearby Stanley Theater.

The Plaza Management Corporation purchased the hotel in 1951, but its future was not secure. By the 1970s, the commercial center of Journal Square began to lose business to the suburban shopping malls. The declining occupancy rate forced a reconsideration of the use of the building. In 1978, the United Auto Workers and the Senior Citizens Council, with the Housing and Development agency, purchased the hotel at auction for $400,000. They renovated the hotel for a senior residence with 93 units in October 1980.