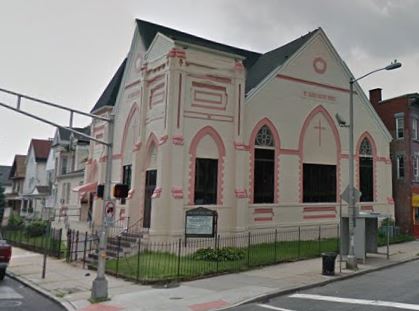 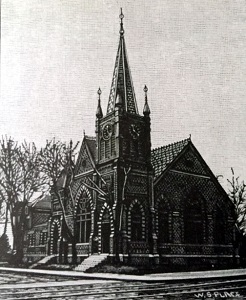 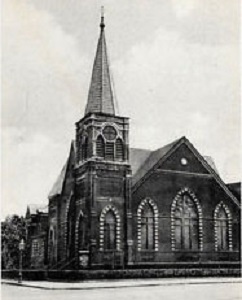 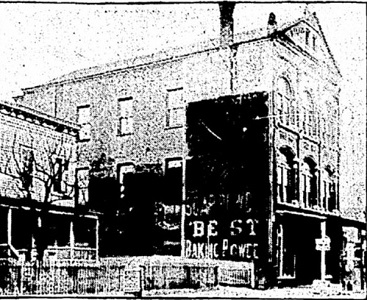 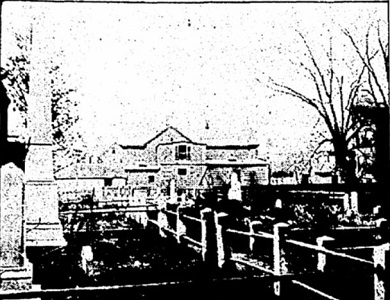 The large ecclesiastical structure, on the southeast corner of Linden Avenue and Ocean Avenue in Greenville, has been the spiritual home of the Mount Calvary Baptist Church of Jersey City since 1969. The building was originally constructed in the late 1880’s by the Linden Avenue Methodist Episcopal Church after that congregation had outgrown their first church located further west on Linden Avenue. The earlier church was known simply as the Greenville M.E. Church, and it bears the distinction of being the first Christian denomination to organize and erect a church in the Greenville area.

According to the local historian Alexander McLean, meetings were then being held in the school house on Old Bergen Road and "the infant church grew so rapidly that in the following year, 1845, the Rev. David Graves was assigned as pastor. It then formed part of the Hudson City circuit, which included Communipaw and Centreville [later part of Bayonne]" (295).

McLean continues: "The first church was built on what was then known as Georges Lane, now Linden Avenue, with an entrance from Bergen Road, and with no houses near it. Although difficult of access, its services were well attended. It was a commodious brick structure, and cost about $3,000" (295). A parsonage was built during the 1860’s for approximately $1,500 under Rev. A. E. Compton. (Also see Jersey Journal article, November 6, 1909).

In 1887, the Rev. W. E. Blakeslee called for the construction of a new church due to the growth of the congregation and crowded conditions. The population of Jersey City had almost doubled from 82,546 in 1870 to 163,003 by 1890. The New York Times (March 29, 1888) referred to the original church on Linden Avenue as "an old fashioned stone building." After obtaining a pledge of over $11,000, a debate ensued whether or not to remove to a new location that delayed construction.

Eventually a decision was made for a new location large enough to accommodate both a new church and parsonage, and six lots were purchased on the corner of Linden and Ocean avenues. Plans for the new Gothic Revival brick church were drawn up by Jersey City architect George Watson Labaw featuring polychromatic arches over the entrances and windows and a square bell tower with tapered steeple and decorative pinnacles. The corner stone for the new church was laid September 20, 1888, and it was dedicated by Bishop E.G. Andrews on Sunday, May 5, 1889.

According to a Jersey Journal article (May 14, 1904), the old church building was sold in the 1890’s to a Mr. Bamber of Brooklyn, NY, who “enlarged it to three stories and extended it so that the front wall was brought out to the building line." The property had to be sold to help pay down the debt of the new construction, but the congregation held on to the title for the cemetery grounds in the back where many of Greenville’s early families were buried.

After attempts to establish a theater in the building failed, Bamber Hall, as it became known, was leased for a ground-floor saloon. Another newspaper article explains that objections regarding the "beer emporium" came not over the repurposing of the church but over the use of  the cemetery grounds. Neighborhood residents and church members looked for the application of a liquor license to be denied on the basis of desecration of the property (April 30, 1895).

Over the years, an assortment of social, religious, and political organizations, including the local Y.M.C.A. and the St. Paul’s Catholic Club, rented space in the building. The 1928 Hopkins Atlas of Jersey City indicates that the structure was later converted into a ladies garment factory. It is uncertain when the building was taken down, but the cemetery’s gravestones were still visible into the early 1950’s.

The Linden Avenue United Methodist Church joined with the Salem Evangelical United Brethren Church in the late 1960's to form a new congregation called the Church of the Covenant United Methodist. The Linden Avenue church building was officially closed in June 1968 since the newly-merged congregation planned to use the Salem Church building on Kennedy Boulevard near Pearsall Avenue (January 25, 1969).

Mount Calvary Baptist Church, organized by the Rev. Charles F. Etheridge in 1952 at 31 Ege Avenue, was rapidly growing and in need of a larger space. They acquired and moved into the vacant Linden Avenue edifice in June 1969. The Rev. Willie W. Wilson assumed the pastorate in 1979 and led the congregation for the next twenty years until his retirement in 2000. Originally constructed of red brick with bluestone trim, exterior renovations of recent years include a light-colored paint and stucco finish with architectural details highlighted to accent the original Gothic arches and other decorative elements.